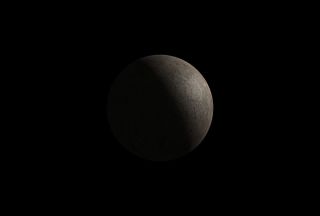 See the planet Mercury briefly in the morning sky at the beginning of October.
(Image: © Starry Night software)

Look up to see planets parading across the sky this month.

A series of planets, big and small, will be visible to skywatchers on Earth, if weather permits. The planet Mercury begins October low and poorly placed in the evening sky and vanishes into the sun's glare during the month. However, the elusive planet will emerge in the morning sky, low in the eastern sky before dawn, by Halloween.

Venus does just the opposite, transitioning from the morning sky to the evening sky as it arrives at superior conjunction (when the planet is on the far side of the sun from Earth's perspective) on Oct. 25. Except for at the very beginning of the month, the bright planet is pretty much out of the loop for viewing all of this month. Saturn and Mars are early-evening objects, while Jupiter reigns supreme in the after-midnight hours. [The Best Skywatching Events of October: Sky Maps (Images)]

Check out Space.com's planet-viewing guide for October below:

Mercury: The closest planet to the sunpasses inferior conjunction on Oct. 16. Since it will go through the ascending node of its orbit on Oct. 21 and through perihelion (the point when it's closest to the sun) on Oct. 25, it withdraws rapidly northwestward from the sun and very quickly climbs into the morning sky. By Oct. 23 (only one week after conjunction), skywatchers may catch a glimpse at the magnitude-1.5 planet by standing 6 degrees above the east-southeast horizon a half-hour before local sunrise. Binoculars should help observers spot it. For reference, a fist held at arm's length covers about 10 degrees of the sky. A fattening crescent in telescopes, Mercury brightens rapidly to magnitude zero by Oct. 27.

Jupiter: Jupiter, which has just crossed over from Cancer into Leo, comes up above the east-northeasthorizon shortly after 1:30 a.m. local daylight time on Oct. 18. The best time to look at Jupiter in the telescope, however, will be as dawn begins to break, when the huge gas giant stands about halfway up in the eastern sky. On the morning of Oct. 18, the waning crescent moon will rise about 30 minutes after Jupiter and can be found about 8 degrees below and to the right of the large planet.

Venus: At the very beginning of the month, intrepid observers might catch Venus barely above the eastern horizon before sunrise. After that, it's out of sight for the rest of October. The planet attains superior conjunction behind the sun on Oct. 25, and Venus will emerge into view as the bright evening star beginning in the winter.

Saturn: Another planet about to vanish into the glare of the sun is Saturn. During early October, the ringed wonder will shine through the glow of evening twilight, low in the southwest sky. On Oct. 25, about 45 minutes after sunset, look very near to the horizon to see Saturn. Situated about 3 degrees to its upper left will be the delicately thin arc of a waxing crescent moon, just two days past new. Stargazers can increase their odds of seeing the planet by scanning the horizon with binoculars.

Mars: For stargazers looking up from parts of Europe and other latitude 40 degrees north locations in mid-twilight (about 45 minutes after sunset), Mars will be 17 degrees up in the southwest all month, staying above the horizon for more than 2 hours. On Oct. 28, a waxing crescent moon will hover high above and slightly to the left of Mars.

Editor's Note: If you take an amazing photo of any planet in the October night sky or any other skywatching photo you'd like to share for a possible story or image gallery, please contact managing editor Tariq Malik at spacephotos@space.com.

Joe Rao serves as an instructor and guest lecturer at New York's Hayden Planetarium. He writes about astronomy for Natural History magazine, the Farmer's Almanac and other publications, and he is also an on-camera meteorologist for News 12 Westchester, New York.Follow us @Spacedotcom, Facebook and Google+. Original article on Space.com.