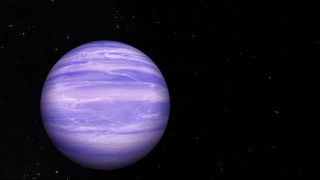 Astronomers have detected traces of water ice clouds in the atmosphere of the brown dwarf WISE 0855, a misfit failed star about 7.2 light-years from Earth. The discovery is the first time water ice clouds have been found beyond the solar system, scientists say.
(Image: © Rob Gizis (CUNY BMCC) via Carnegie Institution/YouTube)

For the first time, astronomers have detected water ice clouds, like the ones that shroud Earth, around a dim celestial body outside of our solar system.

Scientists discovered evidence of the alien water ice clouds in infrared images of a newly discovered brown dwarf that's as cold as the North Pole.

"Ice clouds are predicted to be very important in the atmospheres of planets beyond our solar system, but they've never been observed outside of it before now," study leader Jacqueline Faherty, who is a fellow at the Carnegie Institution for Science in Washington, D.C., said in a statement.

Ice water has been found around gas giants in our solar system. NASA's Cassini spacecraft recently detected water ice crystals on Saturn that had been churned up from deep inside the ringed planet's thick atmosphere during a huge storm. Water ice clouds are also hidden underneath Jupiter's stormy ammonia ice clouds.

Now, scientists found faint signatures of such clouds around the brown dwarf WISE J085510.83-071442.5, or W0855 for short. The object is the coldest brown dwarf ever observed by scientists. It lurks 7.2 light-years away from Earth and was first seen by NASA's Wide-Field Infrared Explorer.

Brown dwarfs are often referred to as failed stars that resemble planets. These objects start out as clouds of collapsing gas and dust much like their main-sequence star cousins. But brown dwarfs never get hot enough for hydrogen fusion to start at the core, and the close-packed stellar material reaches a stable state. Sometimes, these objects are confused with freestanding planets because they look so much like gas giants; many of them are even cold enough to maintain their own atmospheres.

Faherty and colleagues used the FourStar near infrared camera at Las Campanas Observatory in Chile to take 151 images of W0855 over three nights. Scientists had previously predicted how thick water clouds around such a chilly brown dwarf would scatter light. This telltale pattern was observed around W0855. The team also detected evidence of sulfide ice clouds in the atmosphere.

"This object is so faint and it's exciting to be the first people to detect it with a telescope on the ground," study researcher Chris Tinney, an astronomer at the Australian Centre for Astrobiology, at the University of New South Wales, said in a statement.

The findings were published in the Astrophysical Journal Letters on Tuesday (Sept. 9). A draft version of the paper can be read online at the preprint service arxiv.org.