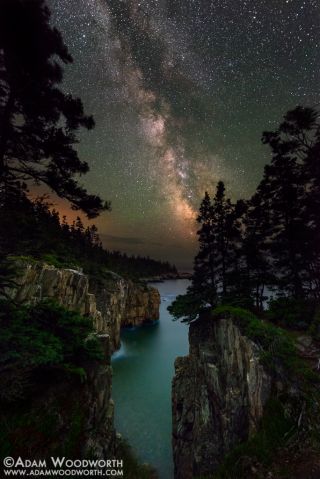 The Milky Way glows above Acadia National Park in Maine in this stunning night sky image by a veteran night sky photographer.

Astrophotographer Adam Woodworth took this image from the Raven's Nest cliffs in Acadia National Park. Woodworth said the shot was a bit of a challenge.

"The night started out with some clouds, then it was pretty clear, but by the time I was setup and it was dark enough for seeing the Milky Way clearly some clouds were moving through again," Woodworth wrote in an email to Space.com. "I was lucky enough to get about 5 minutes of no clouds covering the Milky Way." [More Stunning Photos of the Milky Way ]

The image is a blend of eight exposures taken with a Nikon D800E camera using a Nikon 14-24mm f/2.8 lens at 14mm. Multiple exposures are made to collect enough light for an image that would otherwise not be evident to the eye. Woodworth stacked five of the exposures together using the Starry Landscape Stacker for Mac, with the remaining three exposures focused on the foreground.

Our host galaxy, the Milky Way, is a barred spiral galaxy seen as a band of light in the night sky. It stretches between 100,000 and 120,000 light-years in diameter. It is estimated that the galaxy has approximately 400 billion stars. At the center of our galaxy lies a gigantic black hole billions of times the size of the sun.

Editor's Note: If you have an amazing image of the Milky Way or night sky from a national park, or any other celestial view, and you'd like to share it for a possible story or gallery, you can send images and comments in to: spacephotos@space.com.