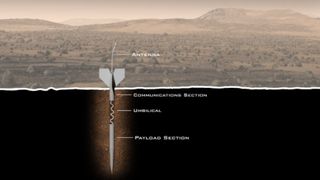 Artist's concept of a life-hunting "penetrator" probe that the proposed ExoLance mission would send to the Red Planet.
(Image: © Explore Mars)

A concept mission that would fire scientific missiles at Mars to search for signs of subsurface life is making technical strides, team members say, but it still needs quite a bit of financial help to get off the ground.

New computer modeling work suggests that the proposed ExoLance mission's arrow-like "penetrators" could indeed reach at least 3.3 feet (1 meter) beneath the Martian surface, a depth at which microbial life may be able to survive on the Red Planet, researchers said.

"We are encouraged by these preliminary results that the fundamental concept of the ExoLance design can be made to work," Joe Cassady, executive director for space at California-based firm Aerojet Rocketdyne, which performed the simulations, said in a statement. "There is still more work to be done, but we don't see anything that looks like a showstopper to get the 1 meter-plus depths we were hoping for." [The Search for Life on Mars (A Photo Timeline)]

The organization needs to raise $250,000 to make this happen, however. Explore Mars launched a 60-day crowdfunding campaign through the site Indiegogo on July 31. As of Monday (Sept. 15), the effort had raised just $15,700, with two weeks left to go. (The campaign ends on Sept. 29).

"Once the concept is sufficiently tested and we have proven the viability of the mission concept, we will approach NASA, other space agencies, and potential commercial providers to carry ExoLance on one or more future Mars missions," team members wrote on the ExoLance Indiegogo site, which can be found here: https://www.indiegogo.com/projects/exolance

ExoLance is designed to be a relatively cheap project that could travel as a secondary payload on another Mars mission, team members have said.

If ExoLance manages to become a full-fledged mission, it would break new ground in the search for Mars life, team members say.

"The Mars underground remains an unexplored region. The shallowness of our present missions to Mars are unfortunate because the underground of Mars is the best place to search for preserved organic remains of past life," McKay wrote on the ExoLance Indiegogo page.

"Radiation and oxidation can easily destroy organics near the surface," he added. "The deeper we can go into the material, the more likely we are to find preserved organics."