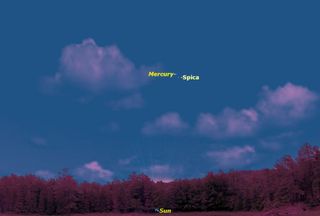 Mercury can be seen in the night sky in September.
(Image: © Starry Night Software)

A series of breathtaking planet views will appear in the September sky for stargazers interested in spotting them.

Venus will gradually descend deeper into the bright dawn twilight. Meanwhile, the other morning planet, Jupiter, is climbing higher in the eastern sky each September morning. In the evening sky, Mars and Saturn shine low in the southwest, while Mercury might be visible with binoculars through the bright evening twilight.

Here are some planet skywatching sights to look out for this month:

Mercury and Jupiter: On Sept. 20, Jupiter will rise in the east-northeast at 3 a.m. local daylight time, moving fairly high in the sky just before dawn. If you make the effort to set up a telescope before the sun rises, you can be among the first to see what became of Jupiter’s tumultuous cloud belts and Great Red Spot while the planet hid within the sun's glare from early June through early August. On this morning, you'll find Jupiter hovering 5.5 degrees to the upper left of a waning crescent moon. (For reference, 10 degrees is about the distance covered by your clenched fist held against the sky at arm's length.) [Best Stargazing Events of September (Sky Maps)]

Look for Mercury just above the western horizon about 30 minutes after sunset. Binoculars will help skywatchers find the planet in the evening sky. Don't confuse it with the star Spica twinkling to its upper left. Spica closes in on Mercury and passes only 0.6 degrees above the planet on Sept. 20.

Mercury's greatest eastern elongation also occurs on Sept. 20; however, people in most northern United States cities won't have a great view. The planet will barely be visible above the horizon even though it will stand 26 degrees from the sun during midtwilight. On the other hand, observers in southern cities — in Florida, the Gulf Coast and South Texas — should be able to see Mercury. The planet will be several degrees higher at the time, and could potentially be seen with the naked eye.

Saturn: By Sept. 27, Saturn will already be sinking in the southwest as twilight falls. The ringed wonder sets roughly two hours after sunset. But the evening of Sept. 27, a delicately slender waxing crescent moon will be situated about 3 degrees below and to the right of the planet. At a similar distance below and to the right of the moon, you might also catch sight through binoculars of 2.8-magnitude Alpha Librae, or Zubenelgenubi, a wide double star.

Mars: During most of September, Mars is a fairly conspicuous light low in the southwest for a couple of hours after every nightfall. The Red Planet begins the month about 6 degrees to the left of Saturn and 18 degrees to the right of the reddish star Antares.

From Sept. 22 to Oct. 3, Mars is within 5 degrees of Antares. The pair is closest on Sept. 28, when Mars is just over 3 degrees to Antares' upper right. Earlier in the month, Mars goes through the head of the Scorpion constellation, passing 0.5 degrees north of Delta Scorpii (Dschubba) on Sept. 18.

On Sept. 29, Mars and Antares will appear in the southwest sky below a crescent moon a couple hours after sunset, making for a potentially pretty tableau.

Don't expect much from Mars in your telescope this month, however. The planet's disk is very tiny, and if you live around 40 degrees north latitude, Mars will only be about 12 degrees high when the sky becomes completely dark.

Editor's Note: If you take an amazing image of any night sky view this month that you'd like to share for a possible story or image gallery, please contact managing editor Tariq Malik at spacephotos@space.com.