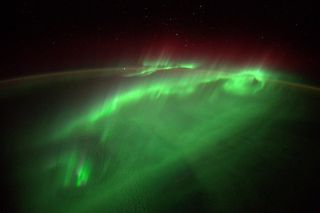 European astronaut Alexander Gerst posted this image of an aurora from the International Space Station on Aug. 29, 2014.
(Image: © Alexander Gerst/ISS)

The northern lights are a stunning sight for people on Earth, but even astronauts can see the incredible light shows from outer space.

Last week, NASA astronauts Reid Wiseman, Steve Swanson and European Space Agency astronaut Alexander Gerst all captured some amazing photos and a video of the auroras from space on the International Space Station. The astronauts even got the chance to fly into the glowing green lights of the aurora while on the station.

"Words can't describe how it feels flying through an #aurora," ESA's Gerst wrote in a post on Twitter on Aug. 29. "I wouldn't even know where to begin." [See more amazing photos of auroras taken in 2014]

Gerst and Wiseman shared several incredible photos of the northern lights glowing green and red on Twitter. One of Wiseman's photos shows an enormous green loop of light stretching out below the space station.

"We can't stop looking outside," Wiseman wrote on Twitter.

The northern lights can stretch as high as 250 miles (400 kilometers) above Earth's surface, a bit higher than the average height of the International Space Station's orbit.

"Swimming in an ocean of glow," Gerst wrote in another Twitter image description. "In some moments it feels like Earth is actually alive."

Swanson shared his image of the dancing green lights on Instagram. His image also shows a loop of green and the space station's robotic arm in the foreground. A red hue shines above the green lights with Earth framed by stars in his image.

Another photo from Gerst posted Wednesday (Sept. 3) shows the Russian Soyuz spacecraft used to ferry astronauts to and from space above a sea of green light. The moon shines to the left of one of the Soyuz capsules.

"The #Moon, about to dive into a glowing ocean of green," Gerst wrote as a caption to the image on Twitter.

Editor's Note: If you capture an amazing photo of auroras on Earth or any other night sky view and want to share it for a possible photo story or gallery, send images and comments in to managing editor Tariq Malik at: tmalik@space.com.