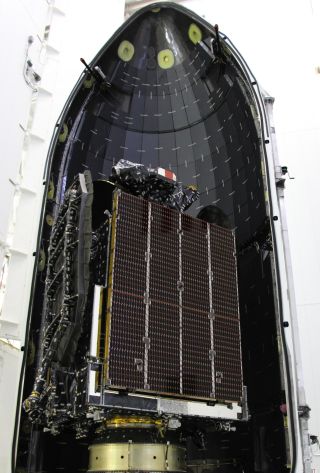 The AsiaSat 6 satellite is encapsulated ahead of its launch atop a SpaceX Falcon 9 rocket.
(Image: © AsiaSat)

SpaceX called off the planned early-morning liftoff of a commercial telecommunications satellite Wednesday (Aug. 27) to perform a thorough check of its launch systems in the wake of a test-flight mishap last week involving a prototype rocket.

The private spaceflight company had intended to launch the AsiaSat 6 satellite to orbit atop its Falcon 9 rocket at 12:50 a.m. EDT (0450 GMT) Wednesday from Florida's Cape Canaveral Air Force Station. But the company called off the attempt Tuesday afternoon (Aug. 26).

"We are not aware of any issue with Falcon 9, nor the interfaces with the spacecraft, but have decided to review all potential failure modes and contingencies again," SpaceX founder and CEO Elon Musk said in a statement. "We expect to complete this process in one to two weeks." [SpaceX Destroys Reusable Rocket in Test (Video)]

"Had the same blocked sensor port problem occurred with an operational Falcon 9, it would have been outvoted by several other sensors. That voting system was not present on the test vehicle," Musk said in the statement.

"What we do want to triple-check is whether even highly improbable corner case scenarios have the optimal fault detection and recovery logic," he added. "This has already been reviewed by SpaceX and multiple outside agencies, so the most likely outcome is no change. If any changes are made, we will provide as much detail as is allowed under U.S. law.”

Friday's anomaly had initially caused SpaceX to push the AsiaSat 6 launch back by 24 hours, from early Tuesday to early Wednesday.

AsiaSat 6 is designed to distribute video and broadband service to customers throughout the Asia-Pacific region. It will be operated by Hong Kong-based firm Asia Satellite Telecommunications Company Limited (AsiaSat).

SpaceX launched the AsiaSat 8 satellite earlier this month. Both spacecraft were built for AsiaSat by California-based firm Space Systems/Loral.

Developing reusable rockets is a priority for SpaceX. Musk has said that a fully and rapidly reusable launch system could cut the cost of spaceflight by a factor of 100, opening up the heavens to exploration.

So SpaceX has conducted numerous test flights of reusable rocket prototypes lately, including the F9R and Grasshopper vehicles. The company has also successfully brought the first stage of a Falcon 9 back to Earth for a soft ocean splashdown during satellite launches twice this year.