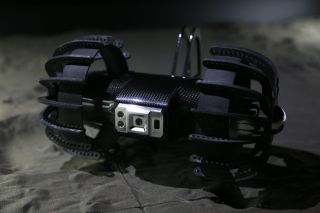 The two-wheel Tetris model is made of extremely light-weight carbon fiber.
(Image: © Hakuto)

Takeshi Hakamada is CEO of ispace Inc. and team leader of Hakuto. He contributed this article to Space.com's Expert Voices: Op-Ed & Insights.

Hakuto is the only Japanese team participating in the $30 million Google Lunar XPRIZE competition. Our name means white rabbit in Japanese, and acknowledges both our team's Japanese heritage and our destination — in Japanese mythology, the image seen on the moon is not a face, but a rabbit.

The Google Lunar XPRIZE has challenged us to land a robot on the moon, drive that robot 500 meters and send back high-definition imagery and video. While Hakuto's primary objective for our first mission is to meet those requirements, we also plan to use this opportunity to explore the lunar surface and contribute to humankind's understanding of the moon. There are many underexplored aspects of the lunar surface and opportunities for commercialization — such as mining for water ice or Helium-3 — but some of the most exciting targets for lunar exploration are caves that may lie beneath the moon's surface. [Gallery: Hakuto's Tethered Lunar Rovers ]

In recent years, researchers have speculated that underground tubes or caves, similar to those found in volcanic areas on Earth, may exist on the moon. Like their terrestrial counterparts, some of these tubes may have partially collapsed, leaving a "skylight" that would give a rover access. Lunar lava tubes  are a potentially important location for a future lunar base — whether for local exploration and development or as an outpost to serve for exploration beyond — as they could provide a stable environment to shelter astronauts from radiation, micrometeorites and temperature extremes.

Those elements make lunar skylights interesting potential destinations for our Google Lunar XPRIZE mission. The long-term aim of ispace Inc., which leads the financial and management aspects of Hakuto, is to develop space resources in order to offer human habitation outside the confines of the Earth . Hundreds, and maybe thousands, of cheap, small, high-performance robots will be needed to explore, prospect and prepare infrastructure for this, and Japanese engineering has the capability to enable such a product. The technologies that are used for the extreme space environment are also applicable for plant-inspection robots, rescue robots and extreme environment exploration on the Earth.

However, the first step is the success of our mission. To achieve the competition goals and explore lunar caves, we have developed a pair of rovers that can work independently or in collaboration: a four-wheel robot (informally called Moonraker) and a two-wheel robot (Tetris). As stored for transport to the moon, the robots take up about a volume of 50cm (width) x 50cm (height) x 50cm (depth), with Tetris having a mass of just under 2 kilograms, and Moonraker about 8 kg — not including the interface that would attach the vehicles to a lander. These two rovers will travel together on a relatively flat area. But to explore a cliff or a vertical hole, the four-wheel rover will act as an anchor and the two-wheel rover will descend using a tether.

We have already built and tested several prototypes in partnership with Kazuya Yoshida of Tohoku University, one of the most prominent space robotics experts in the world. Now, we are working on the detailed design and fabrication of a pre-flight model, which we are currently using in terrestrial demonstrations for the Google Lunar XPRIZE Mobility Milestone Prize. We will use this space-ready hardware — which includes on-board controllers and other systems encased within carbon fiber structures — for field and environmental testing ahead of final fabrication of the flight model.

Hakuto's rovers are very small and use space-ready COTS (Commercial Off The Shelf) products, as well as terrestrial COTS products with a space heritage and/or proven performance in space. Our development principles are to make the rover system as small as possible and to use COTS components whenever possible to reduce the cost and time. This is critical to drop the entrance barrier by offloading the extremely specialized expertise that is required for successful space missions onto suppliers and service providers. This kind of development methodology frees up engineers and entrepreneurs to focus on systems-level integration and overall mission planning, in order to gain entry into the space industry and to expand the space market.

Such an approach is growing more common.  For example, NASA has experimented with using a commercially available smartphone for space environments, like in the PhoneSat mission. And it is no longer a secret that Minerva, a micro-robot developed for JAXA's Hayabusa mission, used a camera removed from Sony's VAIO laptop PC.

Hakuto is the first Japanese team to register for an XPRIZE — not only for the Google Lunar XPRIZE but for any of those competitions.  This fact might seem surprising: Every XPRIZE requires high-technology expertise, for which Japan is well-known. However, the entrepreneurship to form teams, build business plans and register with XPRIZE has been lacking in Japan.

When SpaceShipOne  won the Ansari XPRIZE, I was a graduate student in aerospace engineering at the Georgia Institute of Technology and I felt that this was the dawn of a commercialized space industry. By competing for the Google Lunar XPRIZE, Hakuto spreads the XPRIZE spirit to other Japanese people and shows an opportunity for Japanese people to contribute to the world.

Hakuto was originally a part of White Label Space, a team based in the Netherlands and Japan. In 2008, young engineers and scientists who had worked for the European Space Agency formed White Label Space and registered as a Google Lunar XPRIZE team a year later. Those European team members began development of a lunar lander and launch plan. However, they needed someone to design and develop a rover and, through the network of the International Space University, approached Kazuya Yoshida at Tohoku University in Sendai, Japan.

Yoshida is the director of the Space Robotics Laboratory (SRL) and has more than 30 years of experience with space and robotics. His research interests include dynamics and control of space-robotic systems ranging from orbital free-flying robots to planetary exploration rovers. His activities extend from the development of university-based micro-satellites to the terrestrial applications of space technology, such as robotic remote exploration for search-and-rescue missions. He has made technical contributions to several missions by the Japanese Space Agency, JAXA, including ETS-VII (orbital experiments of a free-flying space robot) and HAYABUSA (an asteroid sample return probe), and to SRL missions RISING/RISING-2 (50 kg microsatellites for science missions) and QUINCE (a mobile robot to cope with the Fukushima power plant incident). It is this experience from Yoshida and the SRL in micro-satellite and JAXA missions that will enable Hakuto to implement our development principles. Many of the terrestrial COTS products we use have already been flown in SRL micro-satellite missions.

The team expanded with members in Japan, developing small rovers in partnership with the SRL. By 2012, the Japanese part of the team had successfully demonstrated several rover prototypes, ranging in mass from 2 kg to 10 kg. With such a small mass, the focus of the team changed to further development of a small rover to be delivered to the lunar surface by a service provider. In January 2013, full operations for the team were moved to Japan to facilitate the change in focus. Our team was subsequently renamed Hakuto.

Hakuto has a diverse team composition. Of course, the leadership of this Google Lunar XPRIZE team is Japanese. However, many team members residing in Japan are of foreign nationalities: In the rover development team at the Space Robotics Laboratory at Tohoku University, several of the students come from the United States, Canada, France, Brazil and other countries.  Diversity is not only about nationality but also work experiences. Hakuto's promotion effort has been led by volunteers who have professional jobs, but outside working hours, help Hakuto using their expertise in video creation, social media, website management, writing, design, etc. Hakuto provides an environment for those people to use their ability and creativity for space-related activities.

We believe that the biggest problem for space innovation now is not technology itself, but a lack of entrepreneurs and management teams who can defy the stereotypes of the old space industry. The young, capable team members of ispace and Hakuto will open new markets in space, bringing agile technology development to the space industry through the cheap, small, high-performance products in which the Japanese excel.