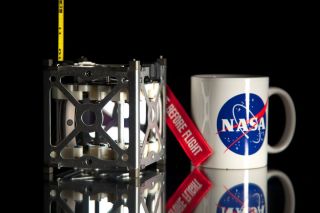 NASA's novel Phonesat 1.0 satellite is seen next to a coffee mug for size comparison. A trio of CubeSats makes up the innovative PhoneSat Project to be launched in 2013.
(Image: © NASA Ames Research Center)

A trio of small NASA satellites flying around Earth may give new meaning to the phrase, "Can you hear me now?"

Three off-the-shelf smartphones were just launched to space as part of a NASA initiative to make powerful satellites cheaper.

NASA has confirmed that, all three of the coffee-cup-size PhoneSats are now in orbit and beaming back information.

"We expect them to stay up for about 2 weeks, but actually our mission with these is only going to last a few days," Andrew Petro, program executive for NASA's Small Spacecraft Technology Program told SPACE.com. "This is a test basically to see how they form." [See How PhoneSats Work (Video)]

The phones will basically function as the brain of the satellite. The three 3 pound (1.4 kilogram) cubes won't be used for communication purposes, Petro said. In fact, the phones cannot send or receive calls or text messages.

"The idea was to use that [the phone] as the brain for the satellite," Petro said. "What you end up with is a relatively inexpensive."

Alexander and Graham — both PhoneSat 1.0s — are battery-powered and carry a Nexus One smartphone running Goggle's Android operating system on board. These kinds of PhoneSats were exposed to extreme conditions in 2011, according to NASA officials. The tiny satellite was tested during sub-orbital rocket flights, from high altitude balloons and on vibration and shock tables.

Bell is a more advanced kind of cubesat. The PhoneSat 2.0 — built around a Nexus S smartphone running on Android — comes equipped with solar panels and a two-way radio that allows engineers to control the satellite from the ground. Its solar panels could make longer missions using the satellite possible in the future, according to a statement from NASA.

"This is really a test of the hardware, and to show that you can take a phone off the shelf, put it in a satellite and fly it in space," Petro said.

NASA is also enlisting the help of amateur radio operators to help them track the PhoneSats. Each satellite is emitting "packets" on the amateur radio spectrum. If you want to take part in the tracking efforts, you can submit the packets you receive to the PhoneSat website (http://www.phonesat.org/).

NASA's PhoneSats aren't the only smartphones flying today. Earlier this year, a satellite built by a group in the United Kingdom carried the first smartphone-powered satellite — called STRaND-1 — into space. The Android phone is enabled to run four apps that will test the Earth's magnetic field, upload videos from people on the planet and monitor the health of the satellite.