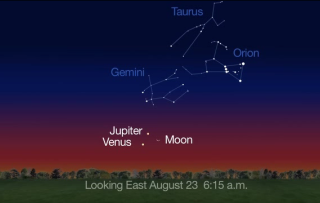 The moon, Jupiter and Venus make a triangle in the morning sky on Aug. 23, 2014.
(Image: © Courtesy NASA/JPL-Caltech)

The three brightest objects in the night sky are set to create a spectacular triangle Saturday (Aug. 23) morning, and weather permitting, early-rising skywatchers should be able to catch the celestial action.

During the past couple of weeks, observers have been treated to a "twilight tango" between the two brightest planets, Venus and Jupiter. Like two ships passing in the night, they first approached each other and then appeared to pass extremely close to each other on Aug. 18.

Venus and Jupiter still adorn the morning sky at dawn, but they are now starting to go their separate ways after their spectacular mid-August tryst. On Saturday, the twilight tango will turn into a trio as Earth's nearest neighbor, the moon, gets involved in this eye-catching celestial scene. [See amazing photos of the Aug. 18 conjunction]

This weekend, a slender sliver of a crescent moon will sit about 5 degrees to the lower right of Jupiter. Venus will be about 5 degrees below and to the left of Jupiter and nearly 10 degrees to the left (east) of the slender sliver of a 4-percent-illuminated moon. Your clenched fist held at arm's length is roughly equal to 10 degrees. The trio will resemble an isosceles triangle, with the arrowhead (at Jupiter) pointing upward.

The arrangement is all a matter of perspective: The moon is only about 251,900 miles (405,400 kilometers) from the vantage point from Earth, and appears to move much more rapidly against the starry backdrop night to night as opposed to the more distant dynamic duo of Venus (151 million miles, or 243 million km) and Jupiter (577 million miles, or 929 million km).

This Saturday might be one of the last chances to see Venus in all its bright glory. The planet will soon be ending its brilliant morning appearance, which started in late January. The brilliant planet is still easy to spot below Jupiter, but after mid-September, it will be rising only about 30 minutes before sunrise.

In contrast, Jupiter will be climbing progressively higher with each passing morning and will become more and more prominent in the predawn sky.

But on Saturday morning, about 45 minutes before sunrise, low in the east-northeast sky, Jupiter will share the billing with Venus and the moon. These three brightest objects of the night will call everyone's attention to the eastern sky as the dawn twilight advances.

Editor's Note: If you capture an amazing view of Venus, Jupiter and the moon together in the predawn sky and would like to share the experience with Space.com, you can send images and comments to managing editor Tariq Malik at: spacephotos@space.com.