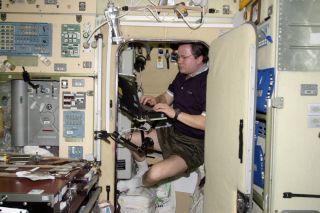 Researchers discovered that 64 astronauts on board 80 space shuttle missions, and 21 astronauts on the International Space Station slept for just six hours per night on average, even though their schedules called for 8.5 hours of slumber.

"The study provided us valuable data and insights into incidence and severity of sleep deficiencies in space, and has driven the development of countermeasure approaches that are already being tested aboard the space station," Bill Paloski, manager of NASA's human research program, said in a statement.

NASA is already attempting to fix the problem and will continue to monitor astronauts for any ill effects, officials added.

"Efforts are planned to understand more fully the spaceflight environment and the role that other factors may play in reducing or promoting sleep," said Lauren Leveton, NASA element scientist for behavioral health and performance in the human research program.

Such efforts include looking at workload, sensory stimulation and stresses for astronauts, Leveton added.

Scientists have long known that astronauts suffer from sleep deprivation on space missions, but the new study provides more specifics than before.

The results should not only aid astronauts, but should also help people combat fatigue here on Earth, officials said. For example, the lessons learned could help long-haul truck drivers, airline pilots and surgeons stay sharp for extended stretches on the job.

The agency is also looking at making physical changes to the space station, such as installing new light bulbs that would be easier on the astronauts' circadian rhythms — the 24-hour cycle that regulates many body processes, including sleep patterns. These bulbs would help by shining different wavelengths of light later in the day, approximating what happens as dusk approaches on Earth.

The new study is detailed in the latest edition of The Lancet Neurology journal.