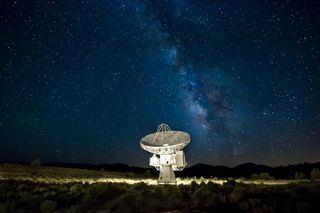 While alien life can be seen nightly on television and in the movies, it has never been seen in space. Not so much as a microbe, dead or alive, let alone a wrinkle-faced Klingon.

Despite this lack of protoplasmic presence, there are many researchers – sober, sceptical academics – who think that life beyond Earth is rampant. They suggest proof may come within a generation. These scientists support their sunny point of view with a few astronomical facts that were unknown a generation ago.

In particular, and thanks largely to the success of NASA’s Kepler space telescope, we can now safely claim that the universe is stuffed with temperate worlds. In the past two decades, thousands of planets have been discovered around other stars. New ones are turning up at the rate of at least one a day.

More impressive than the tally is their sheer abundance. It seems the majority of stars have planets, implying the existence of a trillion of these small bodies in the Milky Way galaxy alone. A deeper analysis of Kepler data suggests that as many as one in five stars could sport a special kind of planet, one that is the same size as Earth and with similar average temperatures. Such planets, styled as “habitable”, could be swathed by atmospheres and awash in liquid water.

In other words, the Milky Way could be host to tens of billions of Earth’s cousins.

It is hard to accept that all these worlds are sterile, a circumstance that would make us, and all the flora and fauna of our planet, a miracle. Miracles have little status in science.

Of course, just because there is a lot of attractive, cosmic real estate doesn’t mean finding inhabitants would be easy. There are only three ways to do that, and they all depend on sophisticated and expensive experiments.

First, we could find life nearby. There is real effort to do that, particularly in our reconnaissance of Mars. So far, most of the search has been indirect: deploying rovers whose job is to locate the best places to dig into the red planet, and possibly uncover either fossilised or extant microbes beneath the sterile surface. These are not attempts to find life. They are attempts to find places where life could be found. Progress is deliberate, and it is sluggish.

Without doubt, Mars remains the favourite bet for biology. Nonetheless, some experts prefer to wager on the moons of Saturn and Jupiter. At least five of these satellites seem to be home to some sloshy environments – mostly liquid water, although in the case of Titan, natural gas.

Again, the type of life that could best thrive on these moons would be microscopic. Sensing its presence might be accomplished in several ways, ranging from simple flyby missions that nab effluvia from natural geysers, to sending elaborate drilling rigs to penetrate the ten miles of ice that separate the surface of Jupiter’s moon Europa from the mammoth seas that lie below.

Sadly much of this reconnaissance hardware is still on the drawing boards, not in space. Progress is slow, mostly because funding is low.

A second scheme for sniffing out evidence of biology is to assay the atmospheres of planets around other stars. This is done using a time-honoured technique of astronomy, spectroscopy – an approach that would allow researchers to learn the composition of an atmosphere at many light-years’ distance. While an experiment to find oxygen or methane in someone else’s air is straightforward to describe, it is hard to do. That is because planets are dim, and the stars they orbit are bright.

Various solutions to this problem have been imagined, including multi-element, orbiting telescopes and giant light blockers, or occulters, in space. It is rocket science, but it is not as hard as curing the common cold. Engineers could build this stuff within a dozen years, but only if they had the money.

The third approach to finding biology beyond Earth is looking beyond microbes for intelligent life by eavesdropping on radio signals or flashing laser lights. More antennae and better receivers could speed up this search, but once again, funding is the limiting factor.

For perspective, consider that the proposed 2015 NASA budget has about US$2.5 billion for planetary science, astrophysics and continued work on the new James Webb space telescope – categories that encompass all the planetary searches described above and more. That is considerably less than one-thousandth of the total US federal budget. The budgets for SETI, which takes the third approach, are a thousand times less.

So it boils down to this: we don’t know for certain that there is life in space, but the circumstances of the universe certainly suggest that this is a plausible idea. Finding it would be extraordinarily exciting, but because the payoff is uncertain, the investments in searching have been modest.

Of course, if you don’t ante up, you will never win the jackpot. And that is a question of will.

Seth Shostak is director of the Center for SETI Research.