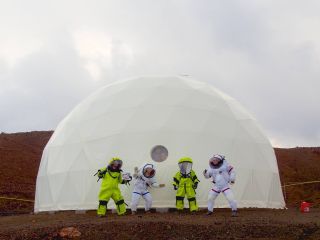 AIEA, Hawaii — Six volunteers are enjoying their first weekend of freedom after spending four months inside a mock Mars base atop a Hawaiian volcano, all in the name of science.

The crew of the second Hawaii Space Exploration Analog & Simulation mission, or HI-SEAS 2, emerged from their mock Mars habitat on Friday (July 25) and webcast their "return to Earth" live in a Google Hangout. The project, which required the volunteers to live and work in a simulated Mars environment, was aimed at helping NASA better understand what future astronauts will need to survive on the Red Planet.

Since late March, the HI-SEAS 2 crew lived in a two-story, 36-foot-wide (11 meters), solar-powered dome situated on the slopes of the shield volcano Mauna Loa on the Big Island of Hawaii. The team only left the habitat during simulated "Marswalks" and wore mock spacesuits to explore the Marslike environment of Mauna Loa about 8,000 feet above sea level. [The 9 Coolest Mock Space Missions]

The HI-SEAS 2 crew conducted a series of personal research projects during the mock Mars mission.

Specifically, Swarmer researched how to improve the design of spacesuits and the execution of spacewalks; Lockwood tested the difference in performance between 3D-printed tools and standard surgical instruments; Stedman, in addition to being the mission commander, served as the crew's geologist, working to develop methods to distinguish between different kinds of minerals in the environment; Poulet studied how well plants grow under different wavelengths of light; Caraccio investigated how often the crew generated trash, to understand what a "waste profile" would look like for a lengthy manned mission to Mars; and Williams monitored the psychological and emotional adjustment of the crew.

The crew's habitat included a full kitchen stocked with non-perishable, freeze-dried and dehydrated food, which allowed the team to cook healthy meals. Aside from cooking and conducting research, the crew made sure to exercise at least an hour each day — using stationary bikes, cardio video programs and other methods — and spent their leisure time playing board games, reading and interacting on social media, among other activities.

They also had to solve many issues.

"In the last 60 days, the crew and I have faced power system failures, water shortages, illness, fatigue, electrical fluctuations, spacesuit leaks, medical emergencies, network dropouts, storms, habitat leaks, and numerous equipment failures," commander Stedman wrote in a blog post midway through the mission. Additionally, the crew experienced a communications blackout that lasted four days — they rationed their water more than normal and had to survive without help from mission control during this time.

These challenges will no doubt help NASA with its future manned mission to Mars, which is slated for the 2030s. "How the crew responds to each crisis will help future mission planners devise new techniques to mitigate risks and better prepare astronauts for the challenges of long duration missions," Stedman wrote.

The crew is now looking forward to returning to normal life, and experiencing all the things they've missed on their four-month-long stay on "Mars." [Photos from the 1st HI-SEAS Mock Mars Mission]

One thing they're eager for: Normal food.

"You don't really think about the [tactile] feedback you get from biting into crisp lettuce and a juicy hamburger, but that's the one thing that's lacking here," Lockwood, who served as the mission's chief technologist, said in a recent statement. "We've basically been subsisting on mush. Flavorful mush, but mush nonetheless."

Swarmer is craving one treat in particular. "Life here is coming to a close and I am looking forward to a chocolate milkshake first of all … and then getting back into work and school for one last semester," she wrote in a blog post earlier this month.

During their mission, the crewmembers said they began to miss some basic features of everyday live on Earth: fresh air, wind, non-repetitive days and the sounds of nature.

Despite 120 days without these Earth luxuries, commander Stedman said he did not regret taking part in the mission.

"I'm glad that I did this," he wrote in a July 25 blog post just before exiting the mock Mars habitat. For Stedman, HI-SEAS 2 was a valuable learning experience that taught him not just about science and spaceflight, but also about patience, diplomacy and letting go — an experience he hopes future space mission planners will find useful.

"I want to believe that my participation in the experiments that were conducted will have a positive impact on space exploration," he wrote.

The next HI-SEAS mission is scheduled to begin in October. That mission is expected to last eight months.