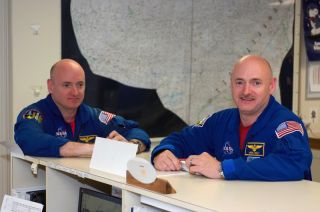 The only set of astronaut twins are set to become test subjects in an unprecedented NASA investigation into how weightlessness impacts the human body.

No, NASA isn't planning to track the Winklevoss twins on their Bitcoin-funded romp to the edge of space with Virgin Galactic.

Rather, NASA will focus on veteran astronaut Scott Kelly, who will embark on a year-long mission to the International Space Station in March 2015, and his identical twin brother, retired astronaut Mark Kelly, who will stay put on on Earth, acting like an experimental control.[Twins In Space: NASA's Twin Astronauts Mark and Scott Kelly (Photos)]

Officials with NASA's Human Research Program announced Friday (March 7) that they will fund 10 investigations as part of their overall study of the Kelly brothers in space and on Earth.

The study will require the 50-year-old twins to give regular samples of blood, saliva, urine and stool; they'll also have to undergo physiological and psychological tests at regular intervals before, during and after the one-year space mission, according to NASA.

"We realized this is a unique opportunity to perform a class of novel studies because we had one twin flying aboard the International Space Station and one twin on the ground," Craig Kundrot, deputy chief scientist of NASA's Human Research Program, said in a statement. "We can study two individuals who have the same genetics, but are in different environments for one year."

Currently, a typical stay aboard the International Space Station is about six months, and only a few humans have ever flown in space for a year or longer. (All of them were Russian cosmonauts aboard the space station Mir.) NASA officials have said that Kelly's longer voyage will allow researchers to more fully examine how spaceflight affects the human body, from subtle changes on the genetic level to changes in the makeup of gut bacteria. The extended trip might also give NASA officials insight into how well astronauts would fare on long missions to an asteroid or Mars.

The Kelly brothers were both Navy test pilots before they were selected as astronauts in 1996. Collectively, they've flown seven missions to date and both have served as space shuttle commanders. Mark retired from NASA and the Navy in 2011 as his wife, former congresswoman Gabrielle Giffords (D-Ariz.), was recovering from a failed assassination attempt.

Here is NASA's list of the 10 winning proposals, which will receive a combined $1.5 million for their research over three years: