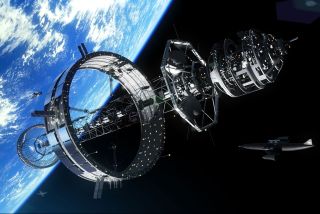 An artist's illustration depicts a future starship under construction in Earth orbit using a ring-type construction facility, which could provide hotel rooms for guests who wish to view the construction.
(Image: © Adrian Mann)

If humanity ever wants to colonize a planet beyond the solar system, it's going to need a really big spaceship.

The founding population of an interstellar colony should consist of 20,000 to 40,000 people, said Cameron Smith, an anthropologist at Portland State University in Oregon. Such a large group would possess a great deal of genetic and demographic diversity, giving the settlement the best chance of survival during the long space voyage and beyond, he explained.

"Do you want to just squeak by, with barely what you can get? Or do you want to go in good health?" Smith said on July 16 during a presentation with NASA's Future In-Space Operations (FISO) working group. "I would suggest, go with something that gives you a good margin for the case of disaster." [Gallery: Visions of Interstellar Starship Travel]

In the past, researchers have proposed that a few hundred people would be sufficient to establish a settlement on or near an alien planet. But Smith thought it was time to take another look.

"I wanted to revisit the issue," he said. "It had been quite a long time, and of course we now know more about population genetics from genomics."

For his study, which was published in April in the journal Acta Astronautica, Smith assumed an interstellar voyage lasting roughly 150 years. This time frame is consistent with that envisioned by researchers at Icarus Instellar, a nonprofit organization dedicated to pursuing travel to another star.

Smith's calculations, which combine information from population genetics theory and computer modeling, point toward a founding population of 14,000 to 44,000 people. A "safe and well-considered figure" is 40,000, about 23,000 of whom would be men and women of reproductive age, Smith writes in the study.

This figure may seem "astoundingly large," Smith acknowledged, but he stressed that it makes sense.

"This number would maintain good health over five generations despite (a) increased inbreeding resulting from a relatively small human population, (b) depressed genetic diversity due to the founder effect, (c) demographic change through time and (d) expectation of at least one severe population catastrophe over the five-generation voyage," Smith writes in the Acta Astronautica paper.

Data from the real world support the overall thrust of his findings, Smith added.

"Almost no natural populations of vertebrates dip below around five to 7,000 individuals," he said during the FISO talk. " There are genetic reasons for this. And when they do go below this, sometimes they survive, but many times they go into what's called a demographic or extinction vortex."

Sending frozen sperm and eggs on the voyage with a limited number of human "tenders" is also an option, Smith said, though he didn't consider it seriously in the new paper.

"It can be done, but it's so different from the human experience of living in communities and so forth that I've kind of avoided that," he said. "I'm kind of assuming, or sticking with, 'What is the experience of humanity so far, and what can we learn from it?"

The same type of reasoning applies to the design of a Mars colony, Smith said.

Further, a large population on the Red Planet would help the settlement achieve self-sufficiency — an important goal of many people who advocate long-term, sustained Mars colonization.

"To do that, to carry that on, you have to have all of that extreme specialization" in skill sets and job descriptions, Smith said. "That's going to require a lot of people."

So the scientists and engineers tasked with planning out humanity's outposts beyond Earth shouldn't try to cut corners or costs by sending out bare-bones colonization crews, he added.

"I suggest cultivating large numbers, and a psychology and an anthropology of space colonization that focuses on large numbers and profusion, rather than barely getting by," Smith said.