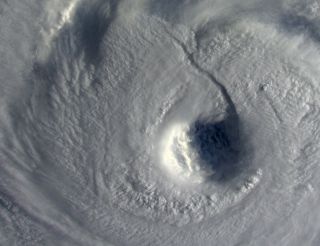 "Scary. The sunlight is far from reaching down the abyss of Neoguri's 65 km-wide eye," wrote ESA's Alexander Gerst from the International Space Station July 7.
(Image: © NASA/ESA)

Astronauts in space had a front-row seat this week to watch the Typhoon Neoguri transform into a powerful a super typhoon that dominated the Pacific Ocean, then downgrade back into a typical typhoon. The space travelers capture stunning images of that stormy drama from their home aboard the International Space Station.

"Just went right above Supertyphoon Neoguri. It is ENORMOUS. Watch out, Japan!" Alexander Gerst, a German astronaut with the European Space Agency, wrote of a photo he posted on Flickr.com Monday (July 7). The image shows the huge storm swirling below a module and solar panel on the station. It was just one of several Gerst sent from the orbiting outpost.

NASA astronaut Reid Wiseman tweeted several photos of the storm, looking at its eye, framing it below a Japanese module on station and showing it above Taiwan.

On Tuesday (July 8), Wiseman sent another photo showing Neoguri fading: "Neoguri has been literally cut in half. Unreal," he wrote.

Typhoon Neoguri first formed in the western Pacific Ocean, south-southeast of Guam, on July 3, a NASA spokesman wrote in an update on the storm.

As of yesterday, the typhoon's top speed was at 105 knots (121 mph, or 195 km/hr). It also was pushing up wave heights to 37 feet (11.2 meters), he added. The U.S. Joint Typhoon Warning Center was tracking Typhoon Neoguri moving north, but forecasted it will turn to the northeast and then east in the coming hours.

The typhoon is expected to make landfall at Kyushu, the third-largest Japanese island, after 8 p.m. EDT Thursday, July 10 (0000 Friday UTC).

The Expedition 40 astronauts on the space station are only one set of watchful eyes keeping track of the storm from space; NASA is also monitoring the storm using its Aqua and Cloudsat satellites and the joint U.S.-Japanese satellite, the Tropical Rainfall Measuring Mission.