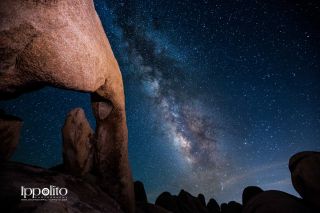 Can your first glimpse of the Milky Way in the night sky get you hooked on astrophotography for life? Yes, says one photographer, who sent in this amazing view of the Milky Way galaxy shining over the Arch Rock of Joshua Tree National Park in California.

Photographer Stephen Ippolito, who lives on the U.S. East Coast in Connecticut, grew up in New Jersey and had never had a chance to see the Milky Way because of light pollution. But that all changed during the New Moon on June 26.

While on vacation in California, Ippolito received assistance from other photographers during his visit to Joshua Tree National Park, the first astrophotography effort for Ippolito, who chronicled his visit in an email to Space.com. The park is located 140 miles (225 kilometers) east of Los Angeles. [See amazing photos of the Milky Way]

Ippolito met up with two other photographers, Brian Hawkins and David Ramer. He had never met in person before, but are both users of the iPhone app, Momentage, which allows people to share collages of moments in one post. After driving with Hawkins from Huntington Beach, California, to the national park, they met up with Ramer.

Ippolito's inexperience with extremely dark night sky views before that night led him to ask his guides: "How do we know where to look for the Milky Way?"

They laughed and replied, "Just wait and see. All you need to do is look up when the sun sets."

The trio began by taking sunset pictures in front of Teddy Bear Cholla cactus, but Ippolito soon ran into trouble.

Said Ippolito: "Believe me they are no teddy bears." In less than five minutes, one of the [cactus] pads caught him, and the spines stuck into his hand. Hawkins used a pair of pliers to remove them.

After that incident, night fell, and the Milky Way appeared in the sky. Ippolito reports, "Any pain I felt from that [cactus] was soon forgotten as the sight of the Milky Way was so overwhelming."

They shot photos at Arch Rock until about 1 a.m. local time, then stopped to take a few more pictures of a solitary Joshua tree with the Milky Way in the background. The night of stargazing ended around 3 a.m.

Ippolito said that "those of us that live on the East Coast in highly light polluted-skies … do not know what we are missing until we see … numerous stars and the Milky Way with our own eyes."

He plans to make additional trips to other nearby dark sky areas.

"I am hooked," Ippolito said.

You can see more of Ippolito's astrophotography work at the website www.stephenippolitophoto.com, on the Momentage app with username "ipp," or on Instagram at "ipp14."

Editor's Note: If you capture an amazing photo of the night sky that you'd like to share with Space.com for a potential story or image gallery, send images and comments in to managing editor Tariq Malik at spacephotos@space.com.