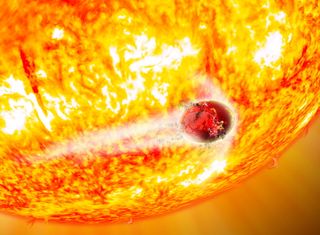 In this artist's conception, the doomed world Kepler-56b is being tidally shredded and consumed by its aging host star. New research shows that Kepler-56b will be engulfed by its star in about 130 million years, while its sibling Kepler-56c will be swallowed in 155 million years. This is the first time that two known exoplanets in a single system have a predicted "time of death."
(Image: © David A. Aguilar (CfA))

BOSTON — A star shining about 2,800 light-years from Earth will chow down on two of its planets millions of years from now.

Kepler-56 is a star somewhat like the sun, and it is slowly getting larger, ballooning out into a red dwarf. Once it moves into its red-dwarf phase, Kepler-56 will gobble up the innermost planet, called Kepler-56b, in about 130 million years. Kepler-56c, the second exoplanet in the star's meal, will be devoured about 25 million years later.

"This is very exciting because this is the first time that we have observed an exoplanetary system with two of its planets sentenced to death," Gongjie Li, of the Harvard-Smithsonian Center for Astrophysics (CfA), said at a news conference here at the 224th meeting of the American Astronomical Society. "We have calculated their execution times." [The Strangest Alien Planets (Image Gallery)]

Scientists think that, eventually, Earth's solar system will meet the same fate as the Kepler-56 system. In about 5 billion years, the sun will grow when it becomes a red giant, devouring Mercury and Venus as it nears the end of its stellar life.

Kepler-56c is somewhat like Saturn, whereas its fellow doomed world is more like Neptune, Li said. Kepler-56b completes an orbit of the star every 10.5 days, and Kepler-56c makes a full orbit every 21.4 days, CfA researchers said. Both Kepler-56c and Kepler-56b orbit closer to their star than Mercury orbits around the sun.

Once the two planets are gobbled up, only one known planet will be left orbiting Kepler-56. Kepler-56d, a gas giant that orbits its star from a relatively safe distance, will be spared when the star billows out into a red giant, Li said.

If scientists were to observe the demise of the two planets, they might be able to see the worlds turn into planetary corpses left behind by the red giant star, Li said.

"Possibly, the [gas] envelope of this giant will be burned off," Li said. "Then, possibly, the core of the planets will be left behind, so we would see this dead corpse floating around in the universe."

The Kepler-56 system is a little out of whack in general. It's the first known multiplanet system that is tilted — scientists found that the orbits of the two inner planets are skewed from the star's equator. Researchers think that planets usually form from a disc that extends outward from a star's equator; however, the skewed nature of Kepler-56b and Kepler-56c means they are both out of alignment with the star's equator.

Astronomers are still trying to understand how the two planets became the way they are today.