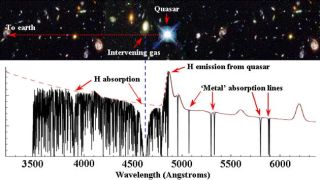 The light from distant quasars passes through intervening gas clouds. Different atoms in the gas absorb light at specific wavelengths. By comparing these quasar absorption lines to those on Earth, researchers can test whether certain constants of nature really are constant.
(Image: © Michael Murphy, University of Cambridge)

Public confidence in the "constants" of nature may be at an all time low. Recent research has found evidence that the value of certain fundamental parameters, such as the speed of light or the invisible glue that holds nuclei together, may have been different in the past.

"There is absolutely no reason these constants should be constant," says astronomer Michael Murphy of the University of Cambridge. "These are famous numbers in physics, but we have no real reason for why they are what they are."

The observed differences are small-roughly a few parts in a million-but the implications are huge: The laws of physics would have to be rewritten, not to mention we might need to make room for six more spatial dimensions than the three that we are used to.

The evidence for varying constants focuses primarily on quasar studies.

Quasars are extremely luminous objects, powered by giant black holes. Some of them are so far away that their light was emitted 12 billion years ago.

Astronomers study the spectra of this ancient light to determine if the early universe was different than now. Specifically, they look at absorption lines, which are due to gas clouds between us and the quasars.

The lines reveal exactly what is in the clouds, since each type of atom has a "fingerprint"-a set of specific frequencies at which it absorbs.

In 1999, Murphy and his colleagues found the first convincing evidence that these fingerprints change with time. Using data from the Keck observatory in Hawaii, they detected a frequency difference between billion-year-old quasar lines and the corresponding lines measured on Earth.

Some of these Earth-bound lines were not well characterized, so Murphy and others recently performed careful lab experiments to confirm that there is indeed a shift in the quasar spectra. A spectra is basically light split into its component frequencies, much like when white light goes through a prism to produce a rainbow.

What's in a constant

Because the frequencies of absorption lines depend on various parameters, the quasar observations are sometimes interpreted as indicating that light was faster in the past, or that the electron had a weaker charge.

But theorist Carlos Martins of the University of Cambridge tells LiveScience that this is not entirely correct: "It doesn't make sense to talk about a varying speed of light or electron charge."

This is because the values of these parameters include units that might change. The speed of light, for instance, might be measured one day with a ruler and a clock. If the next day the same measurement gave a different answer, no one could tell if the speed of light changed, the ruler length changed, or the clock ticking changed.

To avoid this confusion, scientists use dimensionless constants-pure numbers that are ratios of measured quantities.

In the case of the shifts in Murphy's data, the relevant dimensionless constant is the fine structure constant (often designated by the Greek letter alpha), which characterizes the strength of the electromagnetic force.

The researchers found that alpha was smaller in the past, but other "famous numbers" would not be immune to the vagaries of time.

"You would expect variation in all the fundamental constants," Murphy says.

It was therefore not entirely a surprise when-in April of this year-Patrick Petitjean of the Astrophysical Institute of Paris and his collaborators detected a change in the proton to electron mass ratio from molecular absorption lines in quasar spectra.

The mass variation can be interpreted as the strong force's coupling constant being larger in the early universe, Petitjean says.

A hole in the theory

Time-varying constants of nature violate Einstein's equivalence principle, which says that any experiment testing nuclear or electromagnetic forces should give the same result no matter where or when it is performed.

If this principle is broken, then two objects dropped in a gravitational field should fall at slightly different rates. Moreover, Einstein's gravitational theory-general relativity-would no longer be completely correct, Martins says.

A popular alternative to relativity, which assumes that sub-atomic particles are vibrating strings and that the universe has 10 or more spatial dimensions, actually predicts inconstant constants.

According to this string theory, the extra dimensions are hidden from us, but the "true" constants of nature are defined on all dimensions. Therefore, if the hidden dimensions expand or contract, we will notice this as a variation in our "local" 3D constants.

Even if string theory is not correct, the current model of gravity will likely need to be revised to unite it with the other three fundamental forces.

"We have an incomplete theory, so you look for holes that will point to a new theory," Murphy says. Varying constants may be just such a hole.