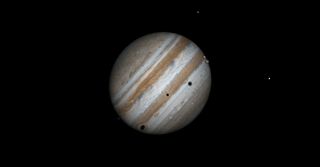 In this computer simulation, three of Jupiter’s moons cast their shadows on the face of Jupiter as they will appear on the afternoon of June 3.
(Image: © Starry Night Software)

Three of Jupiter's moons will cast their dark shadows on the face of the giant planet Tuesday (June 3), but you might need a computer in order to see it.

Most owners of small telescopes enjoy watching the dance of Jupiter’s four largest moons, first observed by Galileo in 1609. As these moons circle Jupiter, they often pass in front of the giant planet, casting their tiny shadows on its face. Although these shadows are very small, they are also intensely black, appearing like tiny drops of ink on the bright surface of Jupiter’s cloud deck.

These shadows can be observed with telescopes as small as 90 mm aperture, widely available to amateur astronomers. [The Galilean Moons of Jupiter (Photos)]

Such shadow transits are quite frequent, occurring as often as once every 42 hours in the case of Io, Jupiter’s innermost satellite. It is much more rare for two satellites to be placed so that their shadows fall on Jupiter simultaneously, and rarer still for three satellites. Four satellites? That can never happen because Jupiter’s moons are in a precise mathematical relationship with on another such that all four satellites can never find themselves on the same side of the planet at the same time.

This triple transit is a difficult toview from the surface of Earth. Jupiteris now approaching the time of year when it passes behind the sun, and is lost to view for a couple of months. There’s only a short window when skywatchers can observe Jupiter each night. That period of time takes place between sunset, and the time when Jupiter is too low to be observed, lost in the turbulence of Earth’s atmosphere.

Let’s take a look at what will happen on Tuesday:

2:18 p.m. EDT (1815 GMT) – Three shadows are on Jupiter: Ganymede, Europa, and Callisto from left to right. Europa and Ganymede themselves are about to move off Jupiter’s disk, smaller Europa just above larger Ganymede. Notice that, because of the angle from which the Sun is shining, over your right shoulder, the shadows of these two moons are widely separated.

While it won't be easy to see the transit from Earth's surface, it's still possible. There is only a narrow band on Earth where the sun has set but Jupiter is still reasonably high in the sky. Where is that band?

A planetarium program like Starry Night lets you figure this out. The most interesting point in this triple transit is just after the third shadow will enter onto Jupiter’s disk and just before Ganymede will move off at about 2:15 p.m. EDT (1815 GMT).

At this time, Jupiter is high in the sky, but the sun is even higher in the sky. A computerized telescope can locate Jupiter in the sky in broad daylight, but it would be too dim to spot the tiny shadows of Jupiter’s moons. By the time the sun has set all three shadows will be long gone from Jupiter. [See amazing night sky photos for May 2014]

In Kiev, sunset will be a 9:03 p.m. local time, just a few minutes before Ganymede’s shadow enters the disk at 9:08. Jupiter will still be 22 degrees above the western horizon, high enough for a good view.

Modern planetarium software can act as our time machine to view future or past events, and also lets us travel in space to view these events from the perfect location.