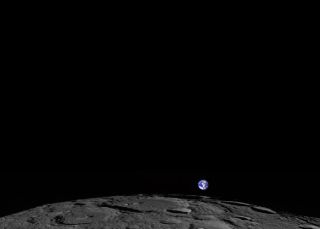 The Earth rises spectacularly as a tiny blue marble above the moon in a new NASA photo that hints at the fragility of humanity and the vastness of space.

NASA's Lunar Reconnaissance Orbiter captured the image on Feb. 1 with its wide-angle camera, depicting a colorized view of the Earth rising over the 112-mile-wide (180 kilometers) Rozhdestvenskiy crater. NASA released a colorized version of thThe event was one of 12 such "earthrises" that occur every day from the perspective of the moon.

The LRO spacecraft's wide-angle camera takes images in a different way than most digital cameras. A typical cellphone camera has more than 5 million pixels, whereas a single frame of the LRO camera has fewer than 10,000 pixels. [Amazing Photos of Earth from Space]

But the LRO camera builds up a much larger image by taking multiple exposures as the spacecraft orbits, a technique known as "push-frame" imaging. Over the course of a month, the orbiter camera collects enough images to cover the whole moon.

The LRO usually spends its time staring at the lunar surface looking for signs of water or ice in permanently shadowed craters. But occasionally the spacecraft points into space to image the moon's exosphere, the thin atmosphere-like layer surrounding it, or to calibrate the craft's instruments. Sometimes, the spacecraft captures images of Earth (like this one) or other planets making their progress across the heavens.

In the image, Earth is a color composite of several frames, optimized for the colors blue, green and red. These colors match what the human eye detects, so they are true to what an average person might see.