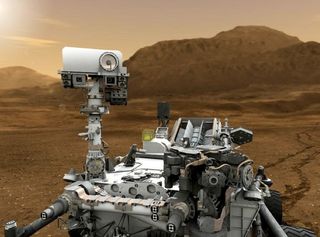 A rendition of the proposed location of the Mars Plant Experiment (MPX) on top of a Curiosity rover image. MPX would be affixed to NASA's next Mars rover, which is due to launch in 2020.
(Image: © Chris McKay and the MPX Proposal Team)

Researchers have proposed putting a plant-growth experiment on NASA's next Mars rover, which is scheduled to launch in mid-2020 and land on the Red Planet in early 2021. The investigation, known as the Mars Plant Experiment (MPX), could help lay the foundation for the colonization of Mars, its designers say.

"In order to do a long-term, sustainable base on Mars, you would want to be able to establish that plants can at least grow on Mars," MPX deputy principal investigator Heather Smith, of NASA's Ames Research Center in Mountain View, California, said April 24 at the Humans 2 Mars conference in Washington, D.C. "This would be the first step in that … we just send the seeds there and watch them grow." [The Boldest Mars Missions in History]

The MPX team — led by fellow Ames scientist Chris McKay — isn't suggesting that the 2020 Mars rover should play gardener, digging a hole with its robotic arm and planting seeds in the Red Planet's dirt. Rather, the experiment would be entirely self-contained, eliminating the chance that Earth life could escape and perhaps get a foothold on Mars.

MPX would employ a clear "CubeSat" box — the case for a cheap and tiny satellite — which would be affixed to the exterior of the 2020 rover. This box would hold Earth air and about 200 seeds of Arabidopsis, a small flowering plant that's commonly used in scientific research.

The seeds would receive water when the rover touched down on Mars, and would then be allowed to grow for two weeks or so.

"In 15 days, we'll have a little greenhouse on Mars," Smith said.

MPX would provide an organism-level test of the Mars environment, showing how Earth life deals with the Red Planet's relatively high radiation levels and low gravity, which is about 40 percent as strong as that of Earth, she added.

"We would go from this simple experiment to the greenhouses on Mars for a sustainable base," Smith said. "That would be the goal."

In addition to its potential scientific returns, MPX would provide humanity with a landmark moment, she added.

"It also would be the first multicellular organism to grow, live and die on another planet," Smith said.

The 2020 Mars rover is based heavily on NASA's Curiosity rover, which landed in August 2012 to determine if the Red Planet has ever been capable of supporting microbial life. Curiosity has already answered that question in the affirmative, finding that a site called Yellowknife Bay was, indeed, habitable billions of years ago.

NASA received 58 instrument proposals for the rover during its call for submissions, which lasted from September 2013 until January of this year. Final selections should be made by June or so, NASA officials have said.

Curiosity totes 10 instruments around Mars, so the 2020 rover may end up with a similar amount of scientific gear.