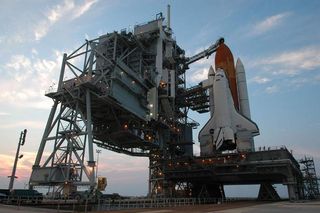 As the sun sets, painting pink and lavender clouds, the Space Shuttle Discovery is revealed after rollback of the rotating service structure in preparation for launch July 1, 2006 on mission STS-121.
(Image: © NASA/KSC.)

CAPE CANAVERAL, Fla.-Almost one year after returning its aging shuttle fleet to flight, NASA is once more poised to launch seven astronauts into orbit.

The shuttle Discovery stands atop Launch Pad 39B here at NASA's Kennedy Space Center (KSC) spaceport, ready to rocket into the Florida sky a few seconds past 3:48 p.m. EDT (1948 GMT) on a two-day trip to the International Space Station (ISS). The planned space shot is NASA's second shuttle flight since the 2003 Columbia tragedy.

"We're ready to go," said Discovery's STS-121 commander Steven Lindsey said this week as he and his six fellow astronauts arrived at KSC for their mission. "The vehicle is ready and everything is looking go."

Everything, it seems, including the weather.

The seven-astronaut crew of Discovery's STS-121 mission is expected to conduct a 12-day flight to the ISS. Once there, the crew will perform vital maintenance to the orbital lab, test shuttle repair techniques, deliver much-needed supplies and equipment, as well as ferry a third ISS crewmember-European Space Agency (ESA) spaceflyer Thomas Reiter-to join the station's two Expedition 13 astronauts.

"He is feeling okay and looking forward to [today's] launch," ESA astronaut Leopold Eyharts, who served as backup for Reiter's ISS Astrolab mission, said of his fellow European spaceflyer.

"I think he has the appropriate amount of excitement," said Scott Kelly, who plans to watch his brother rocket into space from the shore of the nearby Banana River with his parents.

In addition to Lindsey, Mark Kelly and Reiter, STS-121 mission specialists Michael Fossum, Lisa Nowak, Stephanie Wilson and Piers Sellers will ride aboard Discovery when it leaves their home planet behind.

All eyes on Discovery

U.S. Vice President Dick Cheney and his wife Lynne are expected to be among the myriads of well-wishers at NASA's Pad 39B launch complex to see the STS-121 astronauts off on their orbital trip.

More than 100 ground and air-based radar, still image and video cameras will be tracking Discovery's nearly nine-minute trek into orbit. Four new cameras-two on each of Discovery's solid rocket boosters-will also keep close watch on the orbiters wing edges during launch. Their primary focus will be on foam insulation covering the space shuttle's 15-story external tank.

It was a 1.67-pound (0.7-kilogram) chunk of foam that breached the Columbia shuttle's heat shield during its 2003 launch and led to its destruction-and the loss of seven astronauts-during reentry. NASA spent more than two years revamping external fuel tank foam application techniques and culling unneeded insulation from the burnt orange-colored vessel.

During last summer's STS-114 shuttle launch, NASA's first post-Columbia accident flight also aboard Discovery, cameras aboard the shuttle's external tank showed a one-pound (0.4-kilogram) piece of foam fall from a foam-covered ramp designed to deflect wind from a tray of cables and pressurization lines. The debris did not strike Discovery, but was enough to prompt shuttle engineers delay the STS-121 mission and remove the foam structure-known as a protuberance air load (PAL) ramp-from all future external tank designs.

"We're not going to see the same anomaly that we saw on STS-114," said John Shannon, NASA's deputy shuttle chief and head of the STS-121 Mission Management Team (MMT). "And that's because we've removed that PAL ramp."

But Shannon and other shuttle officials stressed that they do expect to see small pieces of foam, which should not pose a threat to Discovery or its crew, fall from the orbiter's fuel tank. NASA is especially interested in tracking foam loss from a series of ice frost ramps covering the brackets that attach the cable tray-now left exposed after the PAL ramp removal-along the external tank's hull.

"The ice frost ramps are a concern," Griffin said Friday, though NASA engineers do not yet fully understand how the small ramps shed foam. "We don't truly and fully understand the problem."

A possible ice frost ramp fix could be ready to flight by the end of this year, NASA officials have said.

If weather prevents today's planned liftoff of Discovery's STS-121 mission, launch officials could turn the spacecraft around in time for another attempt Sunday. NASA hopes to launch the spacecraft within about three days in order to save enough orbiter propellant to allow an extra day-and spacewalk-during the STS-121 spaceflight.

NASA will broadcast Discovery's launch countdown and planned liftoff on NASA TV beginning at about 5:30 a.m. EDT (0930 GMT). You are invited to follow the countdown's progress using SPACE.com's feed, which is available by clicking here.