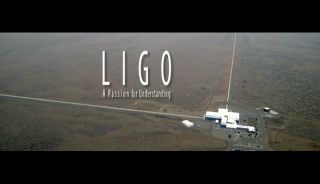 You can now watch a new, 20-minute film that chronicles the people and strange science behind an amazing astronomical tool that uses lasers to search for violent cosmic events trillions of miles from Earth. The documentary "LIGO, A Passion for Understanding," by filmmaker Kai Staats, follows scientists using the Laser Interferometer Gravitational-wave Observatories (LIGO) to hunt for gravitational waves — ripples in space-time created by cataclysmic events in the cosmos. You can watch the full film in the window above or directly through this link: LIGO, A Passion for Understanding

Latest Story: Documentary on LIGO's Search for Gravitational Waves Premieres Today: Watch It Live Online
A new documentary premiering today (April 15) brings the hunt for ripples in the fabric of space-time — called gravitational waves — into focus, and you can watch it live on Space.com.

LIGO, A Passion for Understanding | Indie Film Trailer
The Laser Interferometer Gravitational-Wave Observatory could be as significant an innovation as the telescope. This story of passionate creative researchers striving to understand the fabric of our Universe premieres Tuesday April 15 at Space.com.

How To See Spacetime Stretch - LIGO
When two stars collide or a massive star blows up the fabric of the universe warps and springs back, sending gravitational waves across the cosmos. The wave motion would be very tiny. But to watch it, scientists must build very large instruments.

Project LIGO: How Lasers Could Reveal Glimpses of Gravitational Waves
Scientists might catch sight of ripples in space-time produced by two massive objects colliding in violent crashes light-years from Earth, thanks to LIGO.

Freaky Physics: Why the Discovery of Gravitational Waves Should Blow Your Mind

Hunt Is On for Gravity Waves in Space-Time

The Hunt for Elusive Gravity Waves Heats Up