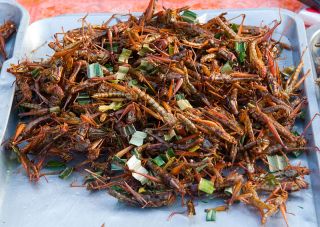 Doug Turnbull is a hard-science-fiction writer. The majority of his books, novellas and short stories confront problems faced by early settlers of other worlds. Turnbull contributed this article to Space.com's Expert Voices: Op-Ed & Insights.

The first humans to land and explore Mars will certainly have to bring their food with them. However, if a permanent settlement on Mars is to be both physically and economically sustainable, eventually settlers will have to grow most, if not all of their food on the Red Planet.

There are a couple of reasons for this. First, unlike hardware or electronics, food is a consumable, which means that the settlers will need a continuous supply. Shipping anything to Mars will be monumentally expensive, at least in the early years. Sending a kilogram (2.5 pounds) of basic food to Mars would likely cost many times more than a similar amount of Beluga caviar consumed on Earth. (It costs $7,000 to $10,000 per kilogram to ship material out of Earth's orbit.)

Second, there will be gaps of roughly 26 months between supply ship arrivals, which means that settlers will have to store some food for two-plus years before a new shipment arrives. It is not possible to ship certain types of food, such as fresh vegetables and fruits, that far — or to store them for many months. In fact, very few foods remain viable over such durations without losing many of the characteristics that make them wholesome and nutritious.

NASA has been funding research into methods of storing food for long periods while keeping astronauts healthy. This work will no doubt be useful. However, there has been only limited research into actually growing food under the conditions plants are likely to encounter on Mars. The Red Planet's gravity is 38-percent that of Earth, and several plans call for a reduced-pressure environment in the Mars habitats, as well. In the near term, before colonists can construct greenhouses, they will have to use artificial light — from LEDs, for example — to power their plants' photosynthesis.

NASA has conducted plant-growth research in microgravity aboard the International Space Station (ISS) and in the Long Duration Exposure Facility, a 21,400-lbs. (9,700 kg) cylindrical satellite that orbited Earth for nearly six years in the 1980s. Still, the effects that these factors will have on plant growth, specifically in a Mars environment, are still largely in the theoretical stages of research. Only actual plant-research experiments that simulate conditions in Mars's gravity and pressure can answer those questions.

Multiple approaches exist to create this type of simulation. A manned construction in low-Earth orbit could simulate a low-gravity environment. Placing a laboratory near the International Space Station (ISS) would be one logical way of doing this; the lab's shipment of supplies and crew could travel along with those for the ISS.

The technology to build a lab like this exists today. For example, the craft structure would consist of a tether a couple hundred meters (around 650 feet) in length, with the lab on one end and a spent, final-stage booster rocket at the other. The lab would have to remain close enough so the crew could escape in the event of a failure, or dock with the ISS to replenish food. Powered by two solar panels pointed toward the sun, the lab would rotate at two revolutions per minute (rpm), simulating Mars's gravity. (Two rpm is the maximum rotational period crew members could tolerate without running the danger of dizziness and disorientation).

The lab could be cylindrical and divided into several sections, like the layers of a cake. One section could house the crew, and another the plants in experimental growing media, such as simulated Mars soil or fluid for hydroponic gardening. A third section could contain the physical equipment necessary to keep the lab supplied with power, the air filtered, the water recycled, the rotation stable and so on. The lab section would have to replicate the atmospheric pressure suggested for future Mars habitats by Dr. Robert Zubrin, President of The Mars Society. Due to the reduced air pressure, the crew's section might need to have elevated oxygen levels, while the plant section would require elevated carbon dioxide levels to foster plant growth. (Special precautions would be necessary to minimize the danger of fire in the high-oxygen environment.)

When working in the plant section, crew members would need to wear oxygen masks, similar to those worn by high-altitude fliers. Under conditions similar to those expected on Mars, plant studies could determine which species would thrive and which would not.

For this to become a viable possibility, NASA engineers would have to solve some daunting technological materials-science and physics issues. But if it turns out that this type of lab is not possible, other alternatives exist.

Unmanned spacecraft can carry experiments and float freely in Earth's orbit, as the Long Duration Exposure Facility did. Technology already exists for enclosed units containing plants with automated plant-watering systems. LED lights have an average lifetime of 15,000 to 25,000 hours, amounting to nearly 10 years with seven hours of daily light exposure for plants.

Other technology could tackle the problem of simulating gravity. Every satellite must maintain altitude and rotation control, which is managed by the satellite's attitude and orbit control system, part of its onboard systems bus. Engineers could configure this system to emulate Mars' gravity. Indeed, the Mars Gravity Biosatellite competition (created by the Mars Society following a brainstorm session between Dr. Zubrin and Elon Musk, founder of SpaceX) provides a model for how to do this. That project, which focused on studying mammals in Mars gravity, could possibly be adapted for the study of plants.

Even without such studies, it is still possible to speculate about food sources for Mars settlers. Initially, a vegetarian diet would seem logical, as it is the simplest in terms of agricultural management. Soybeans provide basic proteins capable of sustaining human health. Greens, sprouts and even seaweed may help create a balanced diet. Indeed, astronauts have successfully grown peas and mizuna lettuce in space, along with carbohydrate staples like wheat and rice. All would be likely choices as mainstay foods — if they can thrive under Mars-like conditions.

Mars will lack direct sunlight and other sources of nutrients that people take for granted here on Earth. At least in the early years, Red Planet residents will not have access to fruits containing vitamin C, so they would have to rely on vitamins, just as astronauts do today.

All of the above-mentioned crops can grow hydroponically to conserve space and resources. Some experiments growing plants in simulated Martian soil have also met with success. In addition to providing a food source, greenery offers the added benefits of converting carbon dioxide exhaled by settlers into oxygen, essential for maintaining a long-term, bio-regenerative life support system. Plants also provide the psychological benefits of relaxation and a general sense of well-being.

On to what probably drew the reader to this article in the first place: Fungi, specifically mushrooms, are excellent, low-maintenance food sources that require little or no light. Mushrooms provide essential nutrients, including vitamin D and vitamin B-6. Easy to grow and harvest, mushrooms are ingredients in many popular dishes. The fungi could grow in compost created using waste material from other agricultural processes, as well as sanitary waste. This use of waste material would be part of a self-sustaining system.

Mars settlers could also turn to grasshoppers as an additional food resource. While not popular in most European countries and the Anglo-sphere, grasshoppers are a major source of animal protein in Asia, Africa and South America. They have a tremendous advantage over many other meat sources because of their extremely efficient conversion of vegetable matter into insect protein. Grasshoppers are twice as efficient when converting vegetable mass into protein as pigs, and five times as efficient as cattle.

In addition, the husbandry associated with raising grasshoppers is relatively simple compared to that needed for cattle, chickens or hogs, and their rapid reproduction rate and short life cycle allows a stable and continuous harvest. Finally, it would be much easier to transport insects to Mars than to send large animals.

The insects could become part of the Mars culture, too. Future settlers on the Red Planet would likely come from all over the world, and many would not suffer from the "Eeeew" factor many Westerners associate with eating insects. So grasshoppers may become a meat staple for Mars residents. Of course, this would depend upon the guaranteed reliability of grasshopper containment systems. Mars settlers certainly would not fare well with the grasshopper equivalent of "Star Trek's" tribbles.

Speaking of "Star Trek," a version of its "food replicator" is in the process of moving from science fiction to science fact. Scientists have successfully synthesized meat, using a 3D printer to align stem cells from animals in laboratory Petri dishes, creating both hamburger and chicken from materials that were never part of a living animal. Perhaps in the future, the list of 3D-printed proteins would also include fish.

NASA has also experimented with using 3D printers for making chocolate and even pizza. The grasshoppers would make a better dessert if dipped in the 3D-printed chocolate. Perhaps in the future, the list of 3D-printed proteins will include fish.

While the exact forms that agriculture would take on Mars are still very much an unknown, at least one thing is clear: Before many years have passed, Mars settlers certainly will have developed their own unique cuisine.

Turnbull's most recent Op-Ed was "Why Robots May Be the Future of Interplanetary Research." Follow all of the Expert Voices issues and debates — and become part of the discussion — on Facebook, Twitter and Google +. The views expressed are those of the author and do not necessarily reflect the views of the publisher. This version of the article was originally published on Space.com.