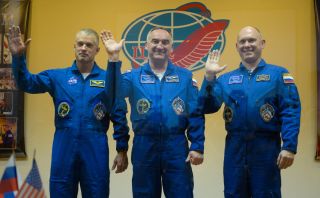 The tense political relationship between the United States and Russia will not affect the planned launch of a NASA astronaut and two cosmonauts to the International Space Station Tuesday (March 25), NASA officials reiterated last week.

The situation in the Ukraine has led to heightened tensions between Russia and the United States recently. Russian President Vladimir Putin annexed Crimea, a region of the Ukraine, making the peninsula a part of Russia on Friday (March 21). President Barack Obama and other world leaders have condemned Putin's decision, bringing sanctions against Russia in response.

NASA's Steve Swanson and Russian cosmonauts Alexander Skvortsov and Oleg Artemyev are set to launch atop a Russian Soyuz rocket to the International Space Station Tuesday, and the political climate will not disturb this event, NASA officials have said. The political situation has not affected the relationship between the Russian and U.S. space programs, NASA spokesman Josh Byerly wrote in an email to Space.com Friday (March 21). [See views of Earth taken by astronauts in space]

"We have a great relationship with all of our international partners, and the crew is focused on launch," Byerly told Space.com.

Since the end of NASA's space shuttle program, the agency has relied on Russia's Soyuz spacecraft to ferry astronauts to and from the space station. By 2017, NASA officials hope to start using private spacecraft now under development in the United States to deliver astronauts to orbit.

International cooperation plays a huge role in the space station program, Mike Fossum, deputy director of flight crew operations for the International Space Station, said during an interview on March 23.

"I think the international cooperation of the 15 nations we have participating in the International Space Station program is really important," Fossum said. "It's great as we share our resources from the different countries, our skills and our teamwork, our experience come together to make these kinds of things happen. It's important to us now to have the Russian Soyuz spacecraft as our way of getting people to and from the International Space Station."

"I think people lose track of the fact that we have occupied the International Space Station now for 13 consecutive years uninterrupted, and that has been through multiple international crises," Bolden said during a news conference on March 4.

"I don't think it's an insignificant fact that we're starting to see a number of people with the idea that the International Space Station be nominated for the Nobel Peace Prize," he added. "It's not trivial. It has continued to exist and continued to function with people from a variety of cultures and beliefs, but we all are focused on the mission of the International Space Station."

Swanson, Skvortsov and Artemyev are scheduled to launch from Baikonur Cosmodrome in the Central Asian country of Kazakhstan at 5:17 p.m. EDT (2117 GMT) on March 25.