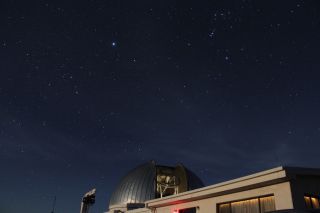 The constellation Orion and Sirius, the brightest star in the night sky, can be spotted in this shot, taken by Space.com's Megan Gannon in front of the MDM Observatory's 2.4-meter Hiltner telescope atop Kitt Peak in the Arizona desert on March 17, 2014.
(Image: © Megan Gannon)

Space.com News Editor Megan Gannon is following Columbia University astronomers and students on a Spring Break astronomy trip at the MDM Observatory atop Kitt Peak in the Arizona desert. The view of the night sky there is quite different than the view in New York City, where Space.com is based, as she explains here:

KITT PEAK, Ariz. - This week, I spent my first night under the stars at Kitt Peak in southern Arizona, where I'm following a group of astronomers and their students on an observing trip. I'm a skywatching neophyte and a worse photographer, but I braved 20 mph winds (and my own jetlag) to set up a tripod outside to try to capture some bright spots of the sky.

No matter how many times I see a moonrise it always surprises me. I didn't get any good pictures of the moon itself, but it provided a nice backlight for the suite of observatories perched at the top of Kitt Peak.

After the sun set last night, a familiar parade of bright stars and planets arrived in the sky. Jupiter popped out of the twilight first, then Sirius (the brightest star in the night sky), then Betelgeuse and Rigel and the other members of Orion.

The spectacle often stops there in New York, but I soon found it difficult to keep track of all the newly emerging lights. I don't think I'd mind switching to a nocturnal schedule here (that is, if it weren't also 75 degrees F and sunny with clear views across hundreds of miles of rugged terrain during the day).