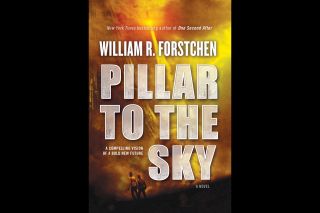 In the not-too-distant future, humans will need to build an elevator to the heavens to find resources so desperately needed down on Earth. That is the world of author William Forstchen's new book, "Pillar to the Sky."

The science fiction novel follows the journey of Gary and Eva, a pair of married scientists at NASA's Goddard Space Flight Center. When the budget for their space elevator (called the pillar to the sky) is "zeroed" by the U.S. Senate, they have to find another way of making their dream into a reality. A private investor comes to their rescue, however, the path to a sustainable space elevator won't be easy.

"Pillar to the Sky" is the first NASA-Inspired Work of Fiction — a program designed to pair scientists and writers up to produce science-literate sci-fi for a general audience. Space.com recently spoke with Forstchen about his NASA-inspired book and what he sees as the future of human spaceflight. See what he thinks of the future of space travel:

Space.com: How did you get set up with the NASA-Inspired Works of Fiction program, and how did that program get started?

Forstchen: I had a book come out four years ago on the threat of electromagnetic pulse weapons called "One Second After." Tom [Doherty, a New York-based book publisher] had been cooking up an idea for some time that back in the glory days of Apollo, NASA had a whole squad of cheerleaders out there with names like Isaac Asimov, Bob Heinlein, the real godfathers of science fiction who were cheering the space program on. [Book Preview: "Pillar to the Sky" by William Forstchen]

It seems the literature of late is entirely dystopic. So, Tom spoke with folks at NASA. Things went back and forth about pairing up authors who still held these positive dreams of the future, and I was the first one they recruited in and two and a half years ago, I went up to Goddard. I spent three days there kicking ideas around. I worked up a proposal, and then spent the year just doing research and everything else to start developing a draft and finally the book came out.

Where did the idea to write about a space elevator come from for you?

It started for me when I read Arthur C. Clarke's "Fountains of Paradise," which was the first novel to really take a serious look at the building of a space elevator. Clarke, so visionary in so many things, however, predicted that it would be 200 years before the technological capability was there. That fascinated me, and the interest has stayed with me for over 30 years now.

In your opinion, why is a space elevator a good option for future spaceflight?

The bottom line is that we are at the bottom of a gravity well. The energy cost of using chemical rockets or any type of propulsion system … is astronomical to get into space. It's a factor that we'll never be able to break. We have to find a different way to go, and a space elevator is the very logical alternative to that. It reduces the cost from thousands of dollar a pound to dollars a pound, and I believe it will be the transportation system of the 21st century.

The beginning of the book starts with a congressional hearing. Why root "Pillar to the Sky" in politics?

Newt Gingrich [former speaker of the U.S. House of Representatives] and I have written some books together, and Newt is a very pro-space politician as well. I was heartbroken over the incident where Newt [was ridiculed] for his proposal to go back to the moon.

There are a couple members of Congress that shot down our space program repeatedly, so I couldn't resist making a comment about them as well. [Giant Leaps: Top Milestones of Human Spaceflight]

Who were the real-life inspirations for scientists in the novel?

We have assembled at Goddard and our other NASA centers some of the brightest minds in the history of humanity. It's America's finest investment. For me, the exciting thing was, to hear them say, "Bill, you wrote a book that's real. We really could do this." Some of the inspiration came from them, these brilliant men and women involved in these projects. Some of the inspiration came from my own graduate school experience.

Goddard plays a huge role in the novel. Did Goddard need to be mentioned in the novel as part of the NASA-Inspired Work of Fiction program?

It was just organic, and it was my way of saluting these folks. We talk about NASA and the public image is always focused on the men and women on top of the rocket.

Tens of thousands, hundreds of thousands of people have stood behind our space program who have never been in the spotlight. They realize that. That's the way life is and they are very dedicated to their work. So many of them that I talk to know that if they make a mistake, somebody might die. I see them as the real heroes, the folks that are sitting there late at night punching in the calculations and figuring things out. Saying, you know, we just might be able to do this. I have to salute Goddard. Goddard is very much a part of the story.

What kind of resources do you think wait for us in space?

We are in an ocean of limitless resources if we just look up. One of my thoughts that I put into the space elevator idea is we can harvest limitless energy. Once you've got the elevator up, now you have a means of hooking solar panels and hardwiring the electricity back down to Earth with superconductivity.

You can read the first chapter of "Pillar to the Sky"  on Space.com.