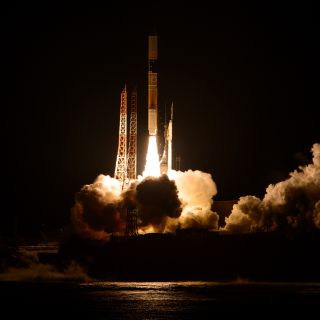 NASA's newest weather satellite soared into space today (Feb. 27), kicking off a mission to observe rainfall and snowfall around the globe in unprecedented detail.

"This is going to provide us the most accurate and advanced precipitation measurements to date from NASA satellites," Gail Skofronick-Jackson, GPM project scientist at NASA's Goddard Space Flight Center in Greenbelt, Md., said during a press briefing last month.

The 8,500-pound (3,850 kilograms) GPM Core spacecraft will orbit Earth at an altitude of 253 miles (407 kilometers), about as high up as the International Space Station. It will circle the planet once every 93 minutes, completing about 16 orbits per day.

The satellite will use two instruments — the GPM Microwave Imager (GMI) and the Dual-frequency Precipitation Radar (DPR) — to study rainfall and snowfall from the Arctic Circle in the north to the Antarctic Circle in the south, giving researchers great looks at clouds and storm systems.

"The GMI will sense the total precipitation within all cloud layers, including, for the first time, light rain and snowfall," he added. "The DPR will make detailed three-dimensional measurements of precipitation structures and rates, as well as particle drop size."

The GPM Core spacecraft will also serve as the anchor of an international network of weather and climate satellites, some of which are already in orbit.

"The GPM, through its core observatory and its constellation of satellites, will dramatically improve our knowledge of global precipitation and our ability to forecast it and its consequences," Neeck said.

The GPM Core satellite — whose cost to NASA is $933 million — was designed to last for a minimum of three years, but mission officials think it will continue to gather data for much longer than that.

"As you know, TRMM was designed for three years, and now it's been 16 years operating," said GPM project manager Art Azarbarzin of NASA Goddard, referring to the NASA-JAXA Tropical Rainfall Measuring Mission satellite, which launched in 1997. "We have designed the exact same way."