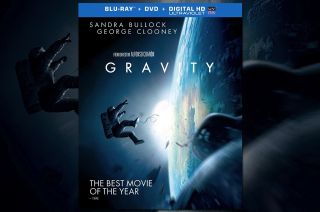 "Gravity" has landed in stores, and launched into space.

"I am watching the movie 'Gravity' up here on ISS," NASA astronaut Rick Mastracchio shared from the space station on Sunday. [See photos from the film "Gravity"]

Mastracchio's copy of the movie was uplinked by NASA's Mission Control in Houston. For the Earth-bound masses, the film is available in digital HD and as multi-disc sets.

The Blu-ray packages feature the "Gravity" poster art on their covers. The DVD set uses a film still showing Sandra Bullock floating just inside the hatch of the space station.

All three sets include the 90-minute movie, which follows the troubled journey of first-time astronaut Dr. Ryan Stone (Bullock) as she and veteran commander Matt Kowalsky (Clooney) struggle to survive in open space after a debris collision destroys their shuttle.

The Blu-ray versions also include five "shot breakdowns" and nine "Gravity: Mission Control" featurettes, as well as a "Silent Space" version of the film, the 22-minute special "Collision Point: The Race to Clean Up Space" narrated by Ed Harris, and a featurette titled "Sandra's Surprise!"

The sets' special features are rounded out by "Aningaaq," a seven-minute short film written and directed by Jonás Cuarón, Alfonso's son and "Gravity" co-writer. "Aningaaq" reveals the other side of Dr. Ryan Stone's distress call as shown in the movie.

"Gravity" has been pulling in awards since the start of the year, including Best Picture from the Producers Guild of America and the Golden Globe for Best Director. The film was also named Best British Film by the British Academy of Film and Television Arts, and it has won seven Critics' Choice awards, including Best Director and Best Actress.

The film, which was advised by veteran NASA astronauts, including Cady Coleman while she was living onboard the International Space Station, has been highly praised for its detailed digital depictions of spacecraft and of outer space itself, as well as its recreation of weightlessness.