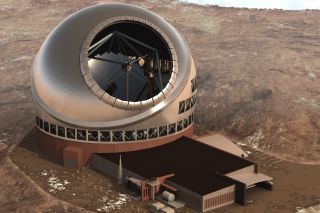 Construction of a massive telescope triple the size of the world's largest current optical telescopes is set to begin on Hawaii's Mauna Kea volcano this year.

The Thirty-Meter Telescope (TMT), which will consist of interlocking, segmented mirrors with a diameter totaling 30 meters (98 feet), has raised 83 percent of its funding, and builders could break ground by this summer, the project's leaders say.

If construction goes ahead on schedule, the telescope will have its "first light" in 2022.

The TMT is closely modeled on technology used by the twin 10-m Keck telescopes in Hawaii, currently some of the world's most powerful optical telescopes.  The TMT will have nine times the light-collecting power of Keck, and 12 times sharper images than the Hubble Space Telescope using the tools of adaptive optics, Bolte said.

The new observatory will enable exciting new studies of the first epoch of star formation, the assembly and evolution of galaxies, the discovery and characterization of exoplanets, and other areas.

Like all ground-based telescopes, the TMT will be subject to atmospheric turbulence, which is the reason why stars appear to twinkle. But the TMT will have technology known as adaptive optics to "de-blur" the images it captures with its giant mirror.

Design is underway for a suite of sophisticated instruments. The Infrared Imaging Spectrometer (IRIS) and The Infrared Multi-object Spectrometer (IRMS) will be able to study the chemical composition, or spectra, of astronomical objects in near-infrared light, and will be capable of "diffraction limited" imaging, which has a resolution as good as the instrument's theoretical limit. The Wide Field Optical Spectrometer (WFOS) will enable imaging and spectroscopy in visible and near-ultraviolet light.

The project has spent $120 million on the design of the observatory, and the operations cost will by $27 million per year, Bolte said. Refurbishing costs tack on another $12 million. Funding for the project is still 17 percent short, however, Bolte said.

Nevertheless, the project received a building permit in 2011, and initial preparation of the Mauna Kea site began in August 2013.  Construction is nominally set to begin in April, though Bolte said it would more likely happen this summer.