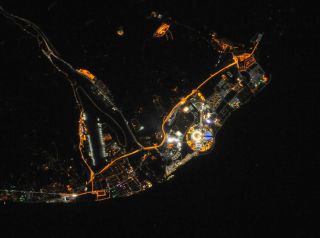 From their exclusive lookout more than 200 miles above Earth, the six astronauts and cosmonauts currently living aboard the International Space Station have a stunning view of the 2014 Winter Olympics park in Sochi, Russia.

At night, the spaceflyers can even see the Olympic flame burning.

NASA released an image this week showing the brightly lit Sochi sporting complex, captured by one of the Expedition 38 crewmembers aboard the orbiting outpost. [More Photos: The Sochi Winter Olympics and Space Travel]

Like millions of other people around the globe, the astronauts and cosmonauts on the space station are keeping tabs on the 2014 Winter Olympic Games, which kicked off on Friday (Feb. 7).

With two crewmembers from the United States, one from Japan and three from Russia, NASA astronaut Rick Mastracchio told Space.com last month that there might be some friendly competition during the games — and that they could even wager their space food to raise the stakes.

The space station was involved in 2014 Olympics in an unprecedented way. As part of the months-long torch relay leading up to the lavish opening ceremony, the Olympic torch was flown the orbiting outpost late last year. Russian cosmonauts Oleg Kotov and Sergey Ryazanskiy brought the torch outside of the space station during a spacewalk before it accompanied another crew on a flight back to Earth.

NASA also released images captured by its Earth-watching Terra satellite, showing both the Sochi Olympic Park Coastal Cluster, which hugs the shores of the Black Sea, and one of the resorts in the mountains near Sochi where the alpine ski competitions will take place.