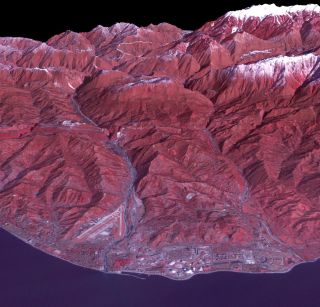 The Black Sea resort of Sochi, Russia, is the warmest city ever to host the Winter Olympic Games, which open on Feb. 7, 2014, and run through Feb. 23. This north-looking image, acquired on Jan. 4, 2014, by the Advanced Spaceborne Thermal Emission and Reflection Radiometer instrument on NASA's Terra spacecraft, shows the Sochi Olympic Park Coastal Cluster, which was built for Olympic indoor sports.
(Image: © NASA/GSFC/METI/ERSDAC/JAROS, and U.S./Japan ASTER Science Team)

The 2014 Winter Olympics officially began with an extravagant opening ceremony in Sochi, Russia, today (Feb. 7), and even NASA has embraced the spirit of the games with striking new satellite views of Olympic sites from orbit.

The newly released photos of Sochi Winter Olympics venues from space were captured by a NASA instrument on the Earth-watching Terra satellite on Jan. 4. NASA unveiled the images on Thursday, with one photo revealing a view of Sochi Olympic Park Coastal Cluster, on the coast of the Black Sea, as it appears from orbit.

"The Olympic Park Coastal Cluster for indoor sports appears as a circular area on the shoreline in the bottom center of the image," NASA officials wrote in an image description. "There's a separate arena for curling, alongside multiple arenas for hockey and skating. The actual city of Sochi, which has a population of about 400,000, is not visible in the picture." [Photos: Sochi Winter Olympics and Space Travel]

A second Terra satellite image shows the Rosa Khutar ski resort in the mountains near Sochi. The resort is the location for the alpine ski competitions for the Winter Olympics.

"The resort is in the valley at center, and the ski runs are visible on the shadowed slopes on the left-hand side of the valley," NASA officials wrote. "The runs may be rated double black diamond, but they're not quite as steep as they appear in this image. Height is exaggerated 1.5 times to bring out topographic details."

NASA's Terra satellite used its Advanced Spaceborne Thermal Emission and Reflection Radiometer (ASTER) to capture the new views of Sochi from space. In the images, red hues indicate vegetation, while snow shows up as white areas. Buildings appear gray in the images, with the sea appearing in dark blue.

The Terra satellite launched in December 1999 and carries five sensitive instruments to observe Earth from space.

NASA satellites aren't the only eyes in space watching the Winter Olympics. Earlier this month, the Earth imagery company DigitalGlobe unveiled its own views of the Sochi Olympic venues from space.

Meanwhile, astronauts in space will follow the Winter Olympics from the International Space Station. The station is home to two American astronauts, a Japanese astronaut and three Russian cosmonauts.