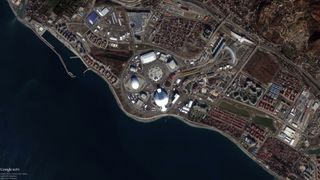 Here's a view of the Olympics only the astronauts can get.

New satellite imagery shows the sprawling sporting venues and slopes that will host the world's best athletes next week when the 2014 Winter Olympic Games in Sochi, Russia begin.

The recent photos come from DigitalGlobe, a commercial company based in Colorado that provides high-resolution images of the planet. [2014 Sochi Winter Olympics and Space Travel (Photos)]

Past views from space illustrate just how dramatically the Olympic complexes have transformed the landscape of the city over the past eight years. DigitalGlobe's images from 2005 and 2007 show tracts of open space where the huge sporting complex now lies along the Sochi's Black Sea coast. (The Olympic Village and other facilities can also been seen in Google Map views of Sochi.)

Sochi boasts several newly built arenas to accommodate sports from speed skating to ice hockey to curling, while resorts miles outside of the city are now prepared to host Alpine skiing contests and the bobsled, luge and skeleton events. Watchdog groups have estimated that Russia has spent nearly $50 billion on the Olympics, making them the most expensive Games yet. President Vladimir Putin, however, recently claimed that Russia only spent about $7 billion to host the highly anticipated event, according to The New York Times.

In November, amid the epic relay of the Olympic flame, two Russian cosmonauts took the Olympic torch on a spacewalk outside of the International Space Station for a historic photo op. The torch was returned to Earth in November soon after the spacewalk in a Russian Soyuz capsule that landed on the steppes of Kazakhstan with two NASA astronauts and a cosmonaut who spent five months in space.

DigitalGlobe's fleet of Earth-watching satellites have been able to snap some timely images, including a photo of the Costa Concordia cruise liner from space, showing the shipwreck on its side; the likely compound where Osama bin Laden was shot and killed; and even treasure-hunter's looting holes that were carved into Syria's archaeological sites amid the country's civil war.