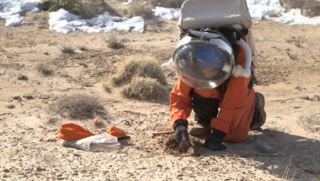 An MDRS scientist searches for hydrogen in the soil.
(Image: © Space.com.)

Recent rover and orbital surveys have revealed the presence of water in the upper few meters of the surface of Mars. This is good news for the near-future human exploration of the planet.

The propulsion system for a human voyage to Mars and back will likely use Nuclear Thermal Propulsion or a chemical engine, and the fuel for both can be liquid hydrogen, produced from hydrogen extracted from the water found on Mars. What's more, reacting hydrogen with carbon dioxide found in the Mars atmosphere would create methane, another promising chemical engine fuel.

MarsCrew134 scientist Vibha Srivastava simulated the generation of hydrogen-based fuels on Mars in the high desert of Utah. Under the guidance and support of her internship supervisor at NASA Ames, she conducted a soil-to-hydrogen proof-of-concept in the course of her time at MDRS.

Vibha conducted a number of EVA (Extra Vehicular Activities) into the surrounding desert in order to find soil with water content similar to that in certain, known regions on Mars.

Those samples were heated in a laboratory-grade oven, the resulting loss of mass used to determine the total moisture content of that sample. Once the correct type of soil was located, she returned several kilograms to the MDRS laboratory. Vibhaheated the soil in a modified pressure cooker, captured the steam via a condenser, and then applied electrolysis to produce hydrogen and oxygen.

While this particular experiment was relatively simple in its execution (compared to production of space craft fuel), the completion of the total process, from excavating soil to igniting the resultant hydrogen supports the total concept of in situ fuel production, on a larger scale.