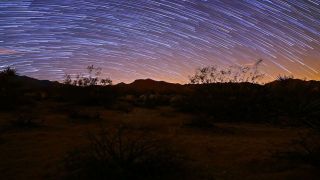 Skywatchers have a lot to look up for in February 2014.

Weather permitting, diligent observers should be able to spot a plethora of planets, comets and stars in the night sky this month. The constellation Orion also takes a prominent position in the winter sky, and Jupiter can be seen after sunset during February.

"After the sun sets on these cold February days, look for a bright 'star' blazing high over head," officials with the Hubble Space Telescope's Space Telescope Science Institute (STSI) said in a video about February skywatching. "This is actually not a star at all, but the planet Jupiter. A telescope will provide a better view." [Stargazing Photos: Amazing February Night Sky Views by Skywatchers]

Mars rises before midnight and, like Jupiter, can also be seen with the unaided eye. Uranus and Neptune can be spotted through binoculars or a telescope, Jane Houston Jones said in a NASA skywatching video. Mercury can be seen in the west at dusk. Saturn rises after midnight, and before dawn a crescent Venus rises in the eastern sky, STSI officials said.

The two largest bodies in the asteroid belt between Mars and Jupiter are also viewable through a telescope this month.

"Both Ceres and Vesta are just a telescope nudge apart from one another this month," Jane Houston Jones of NASA's Jet Propulsion Laboratory said in a video guide to February's night sky. "Look for the pair in the early morning between the bright stars Arcturus and Spica. They will both be close to Mars."

Comet Lovejoy, Comet Linear and Comet Siding Spring are all observable in February, however, skywatchers will need a telescopes to see them, according to NASA.

By locating the bright star Sirius in the constellation Canis Major, observers with binoculars should be able to move downward in the night sky to a brilliant star cluster called M41, STSI officials said. The cluster is home to about 100 stars and several of them are red giants — stars nearing the end of their stellar lives.

Be sure to bundle up when skywatching on cold winter nights. The best garments for a night of chilly stargazing include ski pants and a hooded ski parka, according to Space.com skywatching columnist Joe Rao.

Editor's Note: If you snap an amazing night sky photo or video and would like to share it with SPACE.com for a possible story or gallery, please send images and comments (including your name and the photo's location) to managing editor Tariq Malik at: spacephotos@space.com.