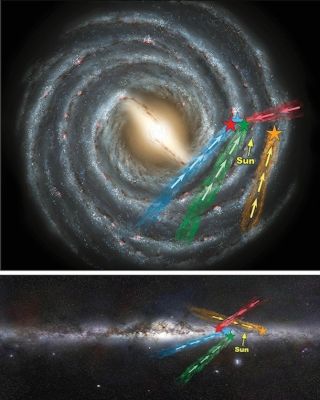 Top and side views show four of the new class of stars traveling fast enough to leave the gravitational grasp of the Milky Way.
(Image: © Graphic design by Julie Turner, Vanderbilt University. Top view courtesy of NASA. Side view courtesy of the European Southern Observatory.)

A new class of fast-moving stars are on their way out of the Milky Way, scientists say.

Unlike most other known hypervelocity stars, the 20 sunsize stars are not exiting after interacting with the black hole in the heart of the galaxy, a massive body whose gravitational influence usually provides the kick needed to escape, the new study found.

"These new hypervelocity stars are very different from the ones that have been discovered previously," the study's lead author Lauren Palladino, of Vanderbilt University, said in a statement. [Top 10 Star Mysteries of All Time]

On the fast track

Leaving the galaxy takes a phenomenal amount of energy. Stars must reach speeds 1 million mph (1.6 million km/h) faster than the 600,000 mph (970,000 km/h) at which objects already speed around the Milky Way.

Most hypervelocity stars were once part of a binary pair that strayed too close to the supermassive black hole at the center of the galaxy. As one star spirals inward toward the black hole, the other is flung outward, fast enough to leave the galaxy. Scientists have discovered 18 giant blue stars on their way out that could have traveled such a route.

"It's very hard to kick a star out of the galaxy," collaborator Kelly Holley-Bockelman, also of Vanderbilt, said in the statement.

The team presented their newly discovered class of stars at the American Astronomical Society meeting in Washington, D.C., earlier this month. The results were published in the Jan. 1 edition of The Astrophysical Journal.

Precise calculations require measurements taken over decades, so some of the stars may not actually travel as fast as they appear to, Palladrino said. To minimize errors, the team performed several statistical tests.

"Although some of our candidates may be flukes, the majority are real," she said.

What might have provided the needed galaxy-fleeing kick, however, is still a mystery.

"The big question is, what boosted these stars up to such extreme velocities?" Holley-Bockelmann said. "We are working on that now."