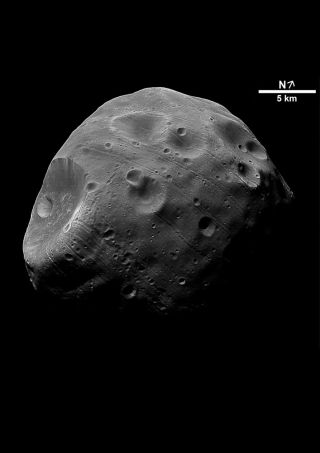 The Martian moon Phobos has a lumpy, nonspherical shape that suggests it may be a captured asteroid.
(Image: © ESA/DLR/FU Berlin (G. Neukum))

The origin of the two small moons of Mars, called Phobos and Deimos, have been shrouded in mystery since their discovery in 1877. The surface of the moons and their orbits hint at different origins. But new models provide stronger suggestions that Phobos, at least, may be a captured asteroid.

An international team of astronomers modeled the ultraviolet light reflected from the surface of Phobos and compared it to the asteroid 624 Hektor and the Tagish Lake meteorite found on Earth. They found that it bore strong similarities to both.

With a radius of only 7 miles (11.27 kilometers), Phobos is a tiny inner moon orbiting close to its parent planet. Like its sister Deimos, it circles the planet in a nearly circular orbit, zipping around so fast that it rises twice a day in the Martian sky. In addition, Phobos has a very low density that suggests a highly porous interior. These two facts suggest that the moon formed in orbit around Mars, perhaps following an impact.

At the same time, studies of the surface of both Phobos and Deimos moons have shown similarities to asteroids from the nearby asteroid belt, which circles the sun between Mars and Jupiter. The moons themselves aren't spherical but instead appear lumpy and disfigured, providing a visual resemblance to the chunks of rock in the asteroid belt. Some scientists have suggested that Phobos and Deimos could have been captured by the Martian gravity.

"As you can see, the surface is showing one possible origin, while the orbit and maybe the interior are showing a different orbit," Pajola said.

Pajola and his team compared studies taken by the European Space Agency's Rosetta spacecraft, as well as data from the USSR Phobos 2 spacecraft with the asteroid 624 Hektor.

"I wanted to make a comparison between our Phobos spectra and a well-known D-type spectral behavior asteroid, like 624 Hektor is," Pajola said.

The team also compared the spectrum with models of the Tagish Lake meteorite, which crashed in the Tagish Lake region of British Columbia, Canada, in 2000. The meteorite also provided strong insights into D-type asteroids.

"The scientific community accepts Tagish Lake to be a D-type meteorite," Pajola said.

Together, he said, the two "present one more hint pointing toward Phobos being a possible D-type, captured-by-Mars asteroid."

Pajola and his team decided to examine the albedo of Phobos, the light reflecting off its surface, in the ultraviolet, or UV. Although previous studies have looked at the visible and infrared wavelengths of light, the ultraviolet range band is blocked from penetrating Earth's atmosphere, and so has received less attention.

"The UV data are complementary with respect to visible and infrared data," Pajola said.

"Through these studies, you can have a more complete analysis of the spectral behavior within a wider range."

The scientists found that the ultraviolet spectrum of Phobos continued to match up with D-type asteroids, providing stronger evidence that the moon may have originated from the asteroid belt.

Their research was published in the Nov. 10 issue of the Astrophysical Journal.

Pajola is cautious about extending these results to Deimos, noting that similar studies of the outer moon would need to be done on its surface properties, density and orbit, a project he hopes to undertake in the future.

But the origins of Phobos aren't completely cleared up.

"I think that the final demonstration for Phobos being a captured asteroid or not will be only with a spacecraft dedicated to its complete and detailed study," Pajola said, "and not only through spacecrafts dedicated to Mars studies, which then use their Mars-dedicated instruments to study Phobos when they have the possibility to orbit close to it."