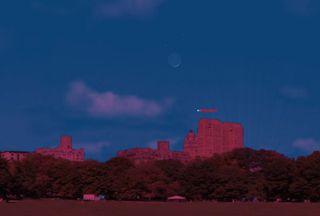 This sky map shows the location of Venus and the moon in the southwestern sky just after sunset on Jan. 2, 2014 as seen from mid-northern latitudes.
(Image: © Starry Night Software)

Venus and the moon, the two brightest objects in the night sky, will pair up tonight (Jan. 2), marking the last time for nearly a year that the two brilliant objects shine near each other in the evening for stargazers to enjoy.

If you step outside this evening about 30 minutes after sunset and look low toward the southwest horizon (make sure you dont have any tall obstructions like a tree or building in your way), you'll be able to see the last evening meetup of the moon and Venus until December 2014, weather permitting. But don't be late; Venus will only be around for about 30 minutes tonight before it sinks down below the horizon.

Venus will be shining well below and to the right of a very skinny crescent moon — so skinny (only 3-percent illuminated) that you might think it could break! The moon, meanwhile, will be just 36 hours past new phase but still will manage to hover high above brilliant Venus. The apparent distance between the two objects will be about 7 degrees. (Your clenched fist held at arm's length measures roughly 10 degrees.)  [100 Most Amazing Night Sky Photos of 2013]

Venus is in the final days of its reign as the dazzling "evening star," with a transition into the morning sky coming very soon. But Venus is still the brightest point of light at dusk, and these first few days of the new year offer your last chance to get a steady telescopic view of Venus near sunset. The planet has now evolved into an incredibly thin, long crescent — its most interesting phase.

Within the next several days, Venus will plummet into the glow of sunset, eventually passing between Earth and the sun — a phenomenon known as inferior conjunction — on Jan. 11. But even then, the dazzling planet will glide a sizable 5.8 degrees north of the sun, so you may be able to follow it with binoculars or a telescope right through that date.

By the morning of Jan. 17, Venus is much easier to find in the sunrise glow. It's 5 degrees above the east-southeast horizon about a half hour before sunrise (as seen from near 40 degrees north latitude). A line from the stars Deneb through Altair will point right at it. By the end of January, Venus will have climbed to an altitude of 15 degrees half an hour before sunrise.

Editor's note: If you have an amazing photo of Venus, the moon or any other night sky object that you'd like to share for a possible story or image gallery, please contact managing editor Tariq Malik at spacephotos@space.com.