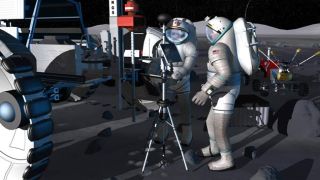 There are many scientific duties to be performed on the Moon – along with sharpening human skills to make the leap to Mars. In this artist’s view, two lunar explorers set up equipment to gather data about the Moon’s present and past.
(Image: © NASA)

Back in January 2004, President George W. Bush put NASA on a trajectory to return astronauts to the Moon as early as 2015 and no later than 2020. Since then, the space agency has been hustling to devise its lunar action plan.

Rebuilding the skywalk to the Moon that was discarded in the early 1970s will not come easy. Not only are new technologies required, but there's also need for NASA to relight its own institutional pilot light ... to muster up the guts to strike out beyond low Earth orbit once again.

How best to stage lunar exploration while setting up, perhaps, a long-term, Antarctica-like base on the Moon means drawing upon both engineering and scientific communities.

Simply sponging off the heritage of Apollo is not good enough. Indeed, NASA finds itself without a legacy to stand on.

More than three decades ago, the United States exploited a myriad of skills to hurl humans to the Moon - then allowed those skills to atrophy.

"We proactively made decisions as a country that caused those capabilities to go away," noted NASA chief, Michael Griffin, during a congressional hearing earlier this year. "We have a decade's worth of hard work in front of us just to be able to get back to where we were ... and then Mars will be the decade after that."

"We're going back to the Moon to relearn the art of exploration. That's very profound," Connolly said at the International Space Development Conference (ISDC) held earlier this month. "We really haven't done real exploring on planetary surfaces by humans for a long time," he said.

And a key ingredient in helping NASA regain its moonlegs is science.

Why should the science community engage the vision of returning to the Moon, going on to Mars and beyond? Christopher McKay, lunar exploration program scientist at NASA Ames Research Center, located in California's Silicon Valley, has a trio of reasons.

"Science has a role in providing the data needed to make human exploration safer, sooner and more capable," explained McKay. "And ultimately what the human explorers are going to be doing on the Moon and Mars is science," he told SPACE.com.

However, McKay said that hard choices are going to have to be made to get human exploration going. "The science community needs to be involved in shaping these choices. We should make the Vision for Space Exploration a science-driven vision and shape the choices accordingly."

Before NASA starts dispatching astronauts to the Moon, U.S. robotic spacecraft are to orbit and land upon that bleak, barren globe - carrying out scientific research and make the measurements that will feed into follow-on human exploration.

For one, NASA's McKay said that lunar topography data is necessary for precision landing and hazard avoidance. Also, health and safety issues for long-term stays of people on the Moon need to be identified. How to live and work in a dusty lunar vacuum is on the checklist too, he said, as is the creation of durable life support gear.

Then there's the question of the "H factor" - that is, whether or not hydrogen in the form of lunar ice is tucked away within Sun shy areas at the Moon's poles. If present and accounted for in such a state, that's a nifty resource to convert to oxygen and fuel.

"The question of ice on the Moon is a tricky one," McKay explained at the recent ISDC. "You might even contend that it's more faith-based than data-based. So the first step is to improve the data base."

To support the many research tasks as a prelude to the re-arrival of humans on the Moon, there's need for a mature, well-connected, well-developed science community, McKay stated.

McKay has suggested that McMurdo Station in Antarctica is an analog useful in guiding any thinking about a future Moon base. That station was established in December 1955 and is the logistics hub of the U.S. Antarctic Program.

After some 50 years of exploration at McMurdo, good science is still being produced, McKay advised during a special session on the return to the Moon, held last March at the 37th Lunar and Planetary Science Conference.

"The Moon is at least as interesting as Antarctica. I don't think that we will exhaust the scientific potential of the Moon in 50 years...just like after 50 years we haven't decided that there's nothing further to learn in Antarctica," McKay pointed out.

Continuous operations in Antarctica are achieved through a series of stints by people at the base, McKay said. "There are no families...no settlement...it's not a colony. It's a research base."

Setting up something similar on the Moon is not at odds with NASA going on to Mars, McKay said. Once humans are traipsing about on the Moon again, he observed, acquiring that lunar competence provides technical -- as well as cultural -- confidence to attempt an even greater challenge - the human exploration of Mars.

If NASA's lunar strategy flourishes, the Moon could well be dotted with science instruments and facilities fulfilling various tasks. An extended human presence on the Moon will enable astronauts to develop new technologies and harness the Moon's available resources. Doing so would allow human venturing beyond the Moon, starting with Mars.

In looking up at the Moon, however, it seems peculiar to view that crater-pocked, airless world as serving up advice on life elsewhere, even right here on Earth. But the Moon is an important natural laboratory for key aspects of the astrobiological exploration of the accessible Universe.

That's the view of James Garvin, Chief Scientist at NASA's Goddard Space Flight Center in Greenbelt, Maryland. "The Moon represents the only 'accessible' natural laboratory for hypervelocity impact cratering from which essential paradigms can be developed in support of astrobiological objectives," Garvin recently reported at a yearly gathering of astrobiologists.

The lunar cratering record and distribution can be used as a quantifiable "chronometer", Garvin noted, with which to better understand the "impact of impact" on the astrobiological evolution of Earth and potentially Mars.

"With all of the astrobiology focus on 'follow the water', our dehydrated neighbor is easy to ignore," said Lynn Rothschild, Director, Astrobiology Strategic Analysis and Support Office at NASA's Ames Research Center.

"However, it has been clear to me for several years that the Moon has had a profound influence on life on Earth. In fact, I think we could make a strong case that humans would not be here without our large, stabilizing Moon," she said.

"It has the best record of impacts and radiation regime on early Earth - a record that has been obliterated here," Rothschild said. "It could provide a way station for the study of life elsewhere, should it be found."

Furthermore, as for a key question of astrobiology -- what is the future of life on Earth and beyond - "the Moon looms large in these calculations," Rothschild said. "Lunar exploration greatly enriches science of the Earth and beyond...and without the science driver, lunar exploration in the near-term becomes a re-plant of the flag."