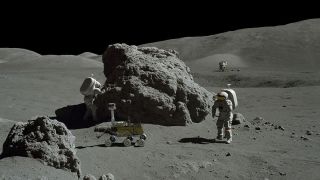 Rekindling a human return to Earth’s moon is viewed as opening the gateway to the solar system.
(Image: © Dan Durda/FIAAA)

China’s Chang’e 3 robotic landing on the moon has helped spur a political crusade in the United States to more aggressively explore and utilize the moon.

At the heart of the campaign is the Lunar Exploration Analysis Group (LEAG), a group chartered by NASA Headquarters to assist in planning the scientific exploration of the moon.  LEAG is organizing a letter writing campaign to Congress to underscore the importance of the moon.

The LEAG scripted strategy is being orchestrated under the banner “Destination Moon” with a key, straightforward goal highlighted in a flyer: “Use the moon to create a sustained human space-faring capability, advancing exploration of the Solar System.” [See photos from China's first moon lander and rover]

The flyer is to be sent, along with a cover letter, to all members of the U.S. House of Representatives and Senate committees that have influence on NASA funding, and to all the lawmakers of the LEAG executive committee members.

Gateway to the solar system

“We were waiting to see if Chang’e 3 landed successfully and it did! Now we want to champion the moon from the U.S. side,” Clive Neal, a leading lunar scientist at the University of Notre Dame’s Department of Civil and Environmental Engineering and Earth Sciences told SPACE.com. He is a member of LEAG’s executive committee.

The Destination Moon movement is predicated on the value of exploring the moon, from opening the gateway to the solar system, pioneering development of new technologies, as well as advancing economic expansion, enabling new scientific discoveries and promoting international partnerships.

“The moon is the most accessible destination for realizing commercial, exploration, and scientific objectives beyond low Earth orbit,” the flyer reads.

Destination Moon supporters are rallying around other key points:

Stephen Mackwell, director of the Lunar and Planetary Institute in Houston, advocates a return to the moon.

“The brief Apollo missions were terminated before we could start investigating the requirements for longer term missions away from Earth,” Mackwell told SPACE.com.

“Before we set off to distant destinations, like Mars, it makes sense to use our nearest near-Earth object — the moon — as a test-bed to see how humans will cope with longer duration periods distant from Earth, including on the surface of another planetary body, and how effectively we can make use of in-situ resources to sustain our presence elsewhere,” Mackwell said. [NASA's 17 Apollo Moon Missions in Pictures]

Independent of the LEAG letter writing campaign, a U.S. return to the moon is getting a political boost from Rep. Frank Wolf (R-VA).

In a Dec. 19 letter to President Barack Obama, the lawmaker calls on the president to hold a White House conference early in 2014 to develop a mission concept for a U.S.-led return to the moon within the next 10 years. The conference would bring together “the best minds from around the country and among our international partners” to forge the initiative, Wolf said.

“As China prepares to send a series of increasingly advanced rovers to the moon in preparation for what most observers believe will ultimately be human missions, many are asking why the U.S. is not using this opportunity to lead our international partners in an American-led return to the moon,” Wolf said.

Wolf’s letter said that the Obama administration’s “recalcitrance in leading a lunar mission is creating a crisis of confidence in the U.S. space program, both at home but also among our partners, including Europe, Canada, Japan and Russia.”

In his three-page letter, Wolf urges Obama to direct the U.S. space program toward a “lunar-focused human exploration program that will reaffirm America's space leadership for the 21st Century.”

How United States politics and China’s moon landing of Chang’e 3 play together is far from clear, said Mike Gold, director of Wash., D.C. Operations and Business Growth for Bigelow Aerospace, a private space firm eager to kick up its own commercial lunar dust.

“The success of this mission was yet another victory for long-term Chinese aerospace planning, progress, and execution,” Gold said. “Chinese leadership clearly understands the importance and potential benefits of lunar activities and we here at home ignore the moon at our own peril.”

Gold told SPACE.com that it’s not a matter of ifthe moon will be utilized for commercial activities, it’s a matter of when and who will enjoy those benefits.

“The moon represents an unparalleled commercial opportunity, and Congress should be looking for ways to expand commercial space operations beyond low-Earth orbit," Gold said. "I hope Chang’e 3 inspires a renewed effort for commercial lunar development but I’m afraid the lack of reaction in Washington speaks volumes."