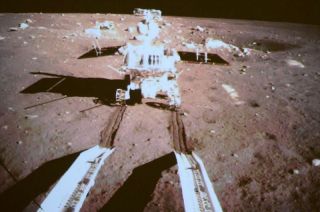 China's lunar rover Yutu ("Jade Rabbit") is seen by a camera on the country's Chang'e 3 lander after both successfully landed on the moon together on Dec. 14, 2013. It is China's first lunar rover mission and the first soft-landing on the moon in 37 years.
(Image: © CNTV)

China's first-ever moon rover is driving on the lunar surface after successfully separating from its carrier lander to begin exploring its landing locale: the Bay of Rainbows.

The Chang'e 3 lunar lander reached the moon Saturday (Dec. 14) at about 9:12 p.m., Beijing time, making China only the third country in the world to achieve such a moon feat after the former Soviet Union and the United States. The lander also delivered the robotic rover Yutu ("Jade Rabbit") to the lunar surface to begin its months-long driving mission.

A few hours after landing, Yutu's wheels were unlocked by the firing of explosive devices and the rover unfolded its solar wings and deployed its instrument-laden mast. A cable connecting the rover and lander was then cut. A "transferer" system — resembling a pair of ladders set up on the lander —then unlocked to inch down closer to the lunar surface, allowing the Yutu rover access to the moon's surface to begin its lunar trek. [See photos of Chang'e 3 on the moon]

"Chang'e 3 has been landed successfully on the surface of the moon today," said Zheng Yong-Chun of the National Astronomical Observatories and a member of the Chinese Academy of Sciences.

The landing site in the Sinus Iridum (Latin for "Bay of Rainbows"), a region along the northern part of the Mare Imbrium ("Sea of Showers") in the moon's northern hemisphere. "The nearest nominated crater is Laplace F," Zheng said. "May Yutu (Jade Rabbit) begin exciting new exploration."

The 1-ton Chang'e 3 lander relied on auto-control for its descent to the moon and became the first spacecraft to soft-land on the lunar surface since the former Soviet Union's Luna 24 in 1976. [Most Amazing Moon Missions of All Time]

The lander hovered some 300 feet (100 meters) altitude above the lunar landscape as it scanned for a safe and sound landing point. The vehicle then throttled down its engine, free-falling to a legged landing.

The lander itself carries scientific gear capable of observing the Earth as well as other celestial objects and is designed to serve for 12 months.

Both the Chang'e 3 rover and lander still face a battle with lunar night temperatures that plummet during 14 days of lunar night. Control of China's first robotic moon landing is being carried out at the Beijing Aerospace Control Center.

Yutu rover on the moon

The Yutu moon rover is named after a pet rabbit that travels with the goddess Chang'e to the moon in Chinese legends. China has called each of its three moon missions to date after the Chang'e legend. The Chang'e 1 and Chang'e 2 orbiter missions launched in 2007 and 2010, respectively.

China's Yutu moon rover is a six-wheel robot that weighs nearly 310 lbs. (140 kilograms) and is outfitted with navigation and panoramic cameras. The lower front portion of the rover is equipped with hazard-avoidance cameras.

The solar-powered rover is built to hibernate at night and could survive three ultra-cold lunar nights, the equivalent of three Earth months.

Yutu tools on the moon

The Yutu rover carries a robotic arm with an Alpha-Proton X-ray Spectrometer, or APXS.

David Kring, senior staff scientist at the Lunar and Planetary Institute in Houston, told SPACE.com that the APXS tool could, among other duties, study recent impact crater material that's been tossed out and about, revealing the material below the moon's surface; look at ejected debris in crater rays and/or in secondary craters; and help researchers develop a better model for impact cratering processes.

According to an informal report drafted by Kring, drawing from various Chinese sources, the moon rover carries nearly 45 lbs. (20 kilograms) of gear and has a 6-mile (10 km) range once free of the Chang'e 3 lander.

The rover's radar is believed to have a piercing depth of 100 feet to nearly 330 feet (30 meters to 100 meters). It apparently can operate in two wavelengths, giving it very high resolution at shallow depths to penetrate through the moon's topside called regolith. The other radar wavelengths can probe through the regolith and into the mare basalts.

"The landing site for Chang'e 3 is in an area of basalt flows that are rich in Titanium similar to those returned by the Apollo 11 and 17 missions," saidClive Neal, a leading lunar scientist at the University of Notre Dame's Department of Civil and Environmental Engineering and Earth Sciences.

"These are potentially younger than those returned by Apollo and investigating the compositions of the basalts in this region will add to our knowledge of the evolution of the lunar interior and history of volcanism on the lunar surface," Neal told SPACE.com.

Neal said that the data returned from the ground penetrating radar system on Yutu could allow scientists to estimate the thickness of the mare fill around the landing site, he said, and at least the depth of the lunar regolith.

"I am really looking forward to the data returned by this mission," Neal said.

Lawrence Taylor, director of the Planetary Geosciences Institute at the University of Tennessee's Department of Earth and Planetary Sciences, is a veteran Apollo lunar scientist. He, too, had high praise for China's Chang'e 3 mission.

"We Apollo lunatics salute you and your country in this marvelous event in becoming the third soft-landing nation. May your success, as initiated by your glorious 'Jade Rabbit,' be the catalyst to spur on all lunar exploration and be a bond to unite all people," Taylor said.

Leonard David has been reporting on the space industry for more than five decades. He is former director of research for the National Commission on Space and is co-author of Buzz Aldrin's new book "Mission to Mars – My Vision for Space Exploration" published by National Geographic. Follow us @SPACEdotcom, Facebook or Google+. Originally published on SPACE.com.