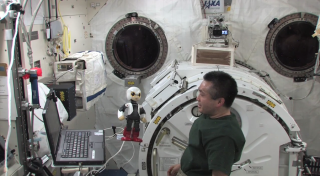 In a milestone for robot-human relations, the talking Japanese robot Kirobo had its first conversation with an astronaut in space.

Astronaut Koichi Wakata of the Japan Aerospace Exploration Agency (JAXA) made small talk with Kirobo aboard the International Space Station on Dec. 6. In newly released video footage of their historic chat, Wakata asks the robot how it got to the orbiting outpost.

Scientists will be recording and collecting data on Wakata's conversations with Kirobo over the next several months to study how humans and robots might live alongside each other during long space journeys in the future. [Photos: Meet Kirobo, Japan's 1st Talking Space Robot]

The following is a translated excerpt of the Dec. 6 conversation from one of project's partners, PR company Dentsu Inc.:

Wakata: How did you get out here into space, Kirobo?

Kirobo: On a Kounotori from Tanegashima.

Wakata: Oh, so you flew all the way into space on a bird? [In Japanese, "kounotori" means "white stork." The transfer vehicle that brought Kirobo to the space station in August was named Kounotori 4.]

Kirobo: It wasn't a bird; it was the Kounotori rocket.

Wakata: It's incredible that you came here all by yourself.

Kirobo arrived at the orbiting lab on Aug. 9, 2013, as part of an unmanned Japanese cargo delivery that launched from the Tanegashima Space Center in southern Japan. Shortly after, the robot uttered its first words in space.

"On August 21, 2013, a robot took one small step toward a brighter future for all," Kirobo said in a video message, riffing on Apollo astronaut Neil Armstrong's famous "one small step" line.

Since it is only programmed to speak Japanese, Kirobo had to wait until Wakata arrived at the space station on Nov. 7 to chat face-to-face with a human. Wakata, 50, is poised to become Japan's first commander of the space station in March, when he takes charge of Expedition 39. He is scheduled to come back to Earth in May 2014. Kirobo, meanwhile, isn't set to return until December 2014, according to Dentsu.

Kirobo is just 13 inches (34 centimeters) tall, and its name mixes the words "robot" and Kibo, which is Japanese for "hope." (Kibo is also the name of the Japanese research module on the space station.) Officially named the Kibo Robot Project, the mission was developed by the Research Center for Advanced Science and Technology at the University of Tokyo, the Toyota Motor Corp., Robo Garage and Dentsu, with assistance from JAXA.