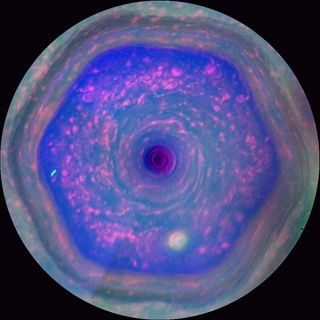 This colorful view from NASA's Cassini mission is the highest-resolution view of the unique six-sided jet stream at Saturn's north pole known as "the hexagon." Image obtained on Dec. 10, 2012.
(Image: © NASA/JPL-Caltech/SSI/Hampton)

A NASA probe has captured an amazing video of the huge and mysterious six-sided vortex spinning around Saturn's north pole.

Scientists created the new video of Saturn's vortex from 128 images snapped by NASA's Cassini spacecraft in December 2012. It's the highest-resolution movie yet obtained of the giant hexagon, which is about 20,000 miles (32,000 kilometers) wide and has been swirling for at least 30 years, researchers said.

"The hexagon is just a current of air, and weather features out there that share similarities to this are notoriously turbulent and unstable," Andrew Ingersoll, a Cassini imaging team member at the California Institute of Technology in Pasadena, said in a statement. "A hurricane on Earth typically lasts a week, but this has been here for decades — and who knows — maybe centuries." [Latest Saturn Photos by the Cassini Orbiter]

The Saturn vortex is composed of a jet stream racing through the planet's northern atmosphere at 200 mph (322 km/h) or so. While most other planets in the solar system are known to have jet streams, nothing quite like the hexagon has ever been seen anywhere else.

The hexagonal vortex was discovered by NASA's Voyager mission in the early 1980s, and Cassini has gotten some good looks at the feature since August 2009, when sunlight began flooding Saturn's northern hemisphere at the start of the planet's northern spring. The probe's views improved considerably in late 2012, when sunlight started illuminating the vortex's inner portions, researchers said.

Several smaller vortices are nested within the main hexagon, and some of them rotate in the opposite direction. The largest of these smaller storms measures about 2,200 miles (3,500 km) across — twice as big as the largest hurricane recorded on Earth, NASA officials said.

The hexagon serves as a sort of barrier, separating particles of various sizes in Saturn's atmosphere.

The $3.2 billion Cassini mission launched in 1997 and began orbiting Saturn in 2004. The probe is currently operating on an extended mission that is set to end in September 2017, when Cassini will make a spectacular death dive into the planet's atmosphere.

But the spacecraft should get some more good looks at the hexagon before ending its life, mission team members said.

"As we approach Saturn's summer solstice in 2017, lighting conditions over its north pole will improve, and we are excited to track the changes that occur both inside and outside the hexagon boundary," said Scott Edgington, Cassini deputy project scientist at NASA's Jet Propulsion Laboratory in Pasadena, Calif.