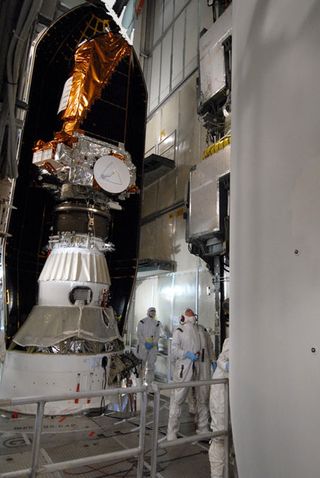 On Launch Pad 17-B at Cape Canaveral Air Force Station in Florida, workers watch closely as the second half of the fairing is moved into the mobile service tower for placement around NASA's Kepler spacecraft (left) to complete encapsulation on Feb. 26, 2009.
(Image: © NASA/Jack Pfaller)

CAPE CANAVERAL, Fla. ? Thelaunch dates for a NASA planet-hunter, a moon-mapper, a shuttle mission to theInternational Space Station and an advanced military communications satelliteall are changing ? and all for different reasons.

A launchfailure on the West Coast, minor trouble with a spacecraft heater, tightlytimed launch windows and ongoing engineering analyses of suspect shuttle mainpropulsion system valves all have been factors in a fluid schedule for upcominglaunches from the Space Coast.

Here?s a look at the newlyset launch dates:

The launch had been set forThursday.

NASA pushed it back to giveengineers time to check common hardware between the Delta 2 and a Taurus XLrocket that failed to deliver a NASA atmospheric sciences satellite to orbitearlier this week.

The launch had been set forMarch 9 but was delayed so engineers could repair and retest a faulty heatercircuit on the spacecraft.

NASA earlier this week setMarch 12 as a tentativelaunch date for shuttle Discovery on a station assembly mission. But theagency has yet to book the date on the Air Force Eastern Range.

Launch of the Atlas 5 andthe military communications satellite would have to be delayed for Discovery tofly March 12. It typically takes two days to reset range systems betweenlaunches of different vehicles.

The launch had been set forApril 24 but was pushed due to a delay in the March Atlas 5 launch with themilitary satellite as well as the timing required for launch of the lunarmission.

The launch must be timed toput both the lunar orbiter and its companion spacecraft on the proper course toachieve science objectives. Two- to three-day launch opportunities come upabout every two weeks.

NASA considered trying tolaunch the moon mission during a window between May 7 and May 9 but decidedAtlas V turnaround operations would make the schedule too tight. The nextwindow opens May 20 and closes May 23.