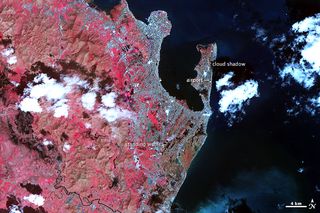 The huge swath of destruction left behind by Super Typhoon Haiyan is revealed by false-color images from the ASTER sensor aboard NASA's Terra satellite.
(Image: © NASA Earth Observatory)

From hills laid bare by winds to coastlines swamped by floodwaters, the massive swath of destruction across the Philippines city of Tacloban from Super Typhoon Haiyan is visible even from space.

One of the most powerful storms to ever hit the Philippines, Super Typhoon Haiyan arrived on Nov. 8 with sustained winds of up 190 mph (305 km/h) in the hours before it made landfall. The aftermath of the storm can be seen in before and after false-color images captured by the ASTER sensor aboard NASA's Terra satellite.

The most dramatic change is in the hills above Tacloban, reports NASA's Earth Observatory. Comparing ASTER images snapped in 2004 and in 2013, just days after the storm, reveals the hills were stripped bare of vegetation. (Plant-covered land is red; bare ground is tan.)

Along the coast, where a powerful storm surge flooded Tacloban, the ASTER image suggests mud and floodwaters still cover the ground. About 800,000 people were moved to storm shelters, but Haiyan's deadly flooding reached a height of 20 feet (6 meters) in the central Philippines. Further inland, the blurry outline of the city's neatly gridded streets could indicate debris blown down by the storm, the Earth Observatory said.

Current estimates place the death toll at more than 2,000 people. Thousands remain missing and relief efforts have been hampered by the difficulty of reaching remote islands, according to news reports.