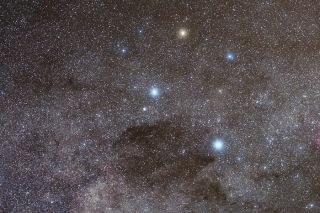 Beta Crucis (also called Becrux or Mimosa) is a bright star in the Southern Cross constellation, near Centaurus. Because of the star's southern orientation, it is best visible from the Southern Hemisphere.

The possible multiple star system, 280 light-years from Earth, is the second-brightest visible star of the constellation, according to astronomer David Darling, following Acrux or Alpha Crucis. Becrux is at least a double star, with individual stars that are only eight sun-Earth distances, or astronomical units (AU), apart. This close distance — they orbit each other every five Earth years — makes it difficult to tell them apart, Darling said.

Beta Crucis is the left point of the crossbar of the Southern Cross, which is featured on the flags of Australia, Brazil, New Zealand, Papua New Guinea and Samoa. The constellation is only visible from areas farther south than 27 degrees north latitude (approximate location of Tampa, Florida). The Southern Cross points almost directly north-south. You follow the vertical axis to find the South Celestial Pole. Becrux's location is:

The main star in the pair is a blue-white giant star that is about 27,000 degrees Kelvin (48,140 Fahrenheit or 26,730 Celsius), which makes it emit most of its radiation in ultraviolet, said University of Illinois astronomer Jim Kaler. Additionally, Becrux appears to be a particular type of variable (called a Beta Cephei) whose magnitudes fluctuate between 1.23 and 1.31, Darling said. Becrux is the 19th brightest star in Earth's night sky. [The Brightest Stars in the Sky: A Starry Countdown]

With the naked eye, Becrux's brightness appears to be 2,000 times greater than that of our sun, Kaler said, but luminosity is even more when looking at all types of radiation: 19,600 times that of the sun.

Becrux itself is about 14 times the mass of the sun, Kaler said, and like the sun it is middle-aged; Becrux will be fusing hydrogen for about another 5.5 million years. Astronomers additionally noted a rotation period of eight days, and a metal content that is a little less than the sun, at about 75 percent.

The main star Becrux may have several stellar companions, but the system will require more study before deciding this for sure, astronomers said.

The star's spectrum implies there must be a "companion" that is about 7 AU away from Becrux, but astronomers haven't been able to spot it optically yet, Kaler said. Additionally, scientists also believe there may be a low-mass dwarf that is an astounding 3,600 AU away, taking 55,000 Earth years to make an orbit around its bigger neighbor.

"The most interesting," of the companions, he wrote, "is a low-mass but active 'pre-main-sequence' star, a star that is still in the process of forming. Discovered through its X-ray radiation, it is quite invisible in the optical spectral domain. At a separation of at least 350 AU, it would take some 1,600 years to make a full orbit."

This low-mass star was first detected by astronomers using the Chandra X-Ray Telescope. In the discovery, reported in 2008, the group noted that it was hard to spot because Becrux itself is so bright.

"We also have detected ... an apparent companion to beta Cru at a projected separation of 4 arcsec [arcseconds]," wrote the group, led by Swarthmore College's David Cohen, on the prepublishing site Arxiv.

"This companion was likely never seen in optical images because of the presumed very high contrast between it and beta Cru in the optical. However, the brightness contrast in the X-ray is only 3:1, which is consistent with the companion being an X-ray active low-mass pre-main-sequence star."