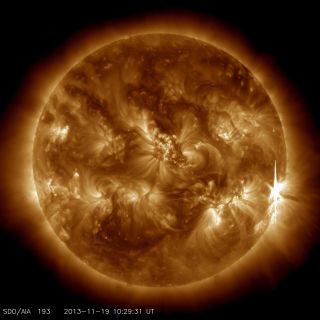 The sun unleashed a powerful solar flare early Tuesday (Nov. 19), the latest in a series of intense storms this month from Earth's closest star.

While the powerful solar flare was not aimed directly at Earth when it erupted, it did trigger a radio blackout at 5:26 a.m. EST (1026 GMT), officials with NOAA-led Space Weather Prediction Center said. NASA's Solar Dynamics Observatory caught sight of the solar flare and captured a high definition video of the solar eruption.

The solar flare ranked as an X1-class event, one of the strongest types of storms the sun can have. It erupted from an active sunspot region called 1893, and space weather experts suspect it may have produced a coronal mass ejection (CME) — an explosion of solar plasma freed during a flare. Usually material from a CME takes some time to reach Earth if it is aimed toward the planet. [Major X-Class Solar Flares Unleashed by the Sun (Photos)]

"This impulsive flare may have an associated CME, but early indications are it will not have a significant impact on the geomagnetic field," SWPC center officials wrote in an update today.

X-class solar flares are the most powerful types of solar storms, and when directed at Earth, the powerful outbursts can put satellites and astronauts in orbit at risk. At the moment, the sun is currently going through the peak of its 11-year solar cycle — named Solar Cycle 24.

"Increased numbers of flares are quite common at the moment, since the sun's normal 11-year activity cycle is ramping up toward solar maximum conditions," NASA officials said in an update about the Tuesday flare. "Humans have tracked this solar cycle continuously since it was discovered in 1843, and it is normal for there to be many flares a day during the sun's peak activity."