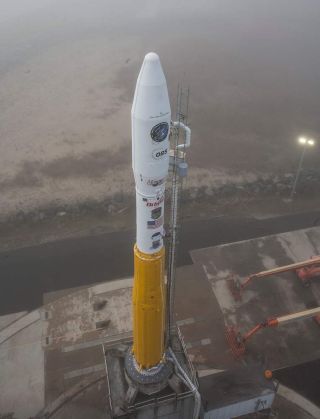 An Orbital Sciences Minotaur 1 rocket will launch from Wallops Island, Va., on Nov. 19, containing satellites for the U.S. Department of Defense, NASA and other agencies.
(Image: © Griffin Communications Group)

The United States Air Force plans to blast nearly 30 satellites into orbit tonight (Nov. 19) in a record-setting launch that should be visible from a large stretch of the U.S. East Coast, weather permitting.

The ORS-3 mission, which is run by the U.S military's Operationally Responsive Space Office, is slated to lift off atop a Minotaur 1 rocket tonight from NASA's Wallops Flight Facility in Viriginia. The launch window extends from 7:30 p.m. through 9:15 p.m. EST (0030 through 0215 GMT on Nov. 20).

The potentially spectacular nighttime launch may be visible from northeastern Canada and Maine down to Florida, and from as far inland as Michigan, Indiana and Kentucky, according to maps provided by NASA and Orbital Sciences, the aerospace firm providing the Minotaur 1. You can also watch the launch live on SPACE.com beginning at 6:30 p.m. EST, courtesy of NASA TV. [Can You See It? Visibility Maps for Nov. 19 Rocket Launch (Gallery)]

The Minotaur 1 will be hauling a cornucopia of 29 satellites tonight — the most ever lofted in a single launch, mission officials said.

"I believe we are setting the record here with this mission," Jason Armstrong, ORS-3 launch integration lead from space services provider TriSept Corp., told reporters in a pre-launch press conference on Nov. 14.

ORS-3's primary payload is the Air Force's STPSat-3 spacecraft, which was built as part of a military program designed to reduce the time and cost required to get satellites to the launchpad. STPSat-3 itself carries five different experiments and sensors that will measure various aspects of the space environment.

The other 28 satellites aboard the Minotaur 1 are tiny craft known as cubesats. These satellites were provided by a variety of institutions and will perform a broad range of experiments and tasks in Earth orbit.

For example, PhoneSat 2.4 — which was built by engineers at NASA's Ames Research Center in Moffett Field, Calif. — marks the next step in the space agency's efforts to develop off-the-shelf smartphone technology for use in space.

NASA launched three other PhoneSats this past April on the maiden flight of Orbital Sciences' Antares rocket, but that trio operated for just a week or so in orbit.

'Were taking PhoneSat to another step in terms of capability, along with seeing if the satellite continues to function for an extended period of time,' Andrew Petro, program executive for small spacecraft technology at NASA Headquarters in Washington, D.C., said in a statement.

The Minotaur 1 will also be toting TJ3Sat, the first satellite designed and built by high-school students. (The kids attend Thomas Jefferson High School for Science and Technology in Alexandria, Va. — hence the spacecraft's name.)

TJ3Sat was conceived partly to help get kids around the world interested in science, technology, engineering and math, said officials with Orbital, which helped the high schoolers on the project. Students and ham-radio operators will be able to exchange data with the bantam spacecraft as it zips around the planet, they added.

To learn more about the satellites launching today and what they will do, check out this list provided by the Operationally Responsive Space Office.

ORS-3 will also test out and validate a number of launch and range improvements for both NASA and the military, space agency officials said. For these reasons, and because it aims to help bring down costs and preparation time for key satellite projects, the Air Force is also calling ORS-3 the Enabler Mission.

"Ultimately, the ORS-3 is about enabling the warfighter to perform his or her mission efficiently and effectively," ORS-3 mission manager Jeff Welsh, of the Space and Missile Systems Center at Los Angeles Air Force Base, told reporters on Nov. 14. "We support that critical effort through rapid response and reduced-cost space operations."

Editor's note: If you snap an amazing photo of tonight's launch, or any other night sky view, and you'd like to share it for a possible story or image gallery, please send images and comments to managing editor Tariq Malik at spacephotos@space.com.