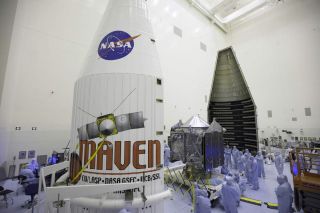 Inside the Payload Hazardous Servicing Facility at NASA's Kennedy Space Center in Florida, engineers and technicians prepare the MAVEN spacecraft for encapsulation inside its payload fairing.
(Image: © NASA/Kim Shiflett)

NASA's newest Mars probe is set to launch Monday (Nov. 18), on a mission to help figure out how the Red Planet shifted from a warm and wet world long ago to the cold, dry place we know today.

The Mars Atmosphere and Volatile EvolutioN spacecraft, or MAVEN for short, is scheduled to lift off atop an Atlas 5 rocket from Florida's Cape Canaveral Air Force Station on Monday at 1:28 p.m. EST (1828 GMT). After a 10-month cruise through deep space, MAVEN will start studying the Red Planet from orbit, seeking clues about how Mars lost most of its atmosphere in the ancient past. You can watch the launch live on SPACE.com via NASA TV beginning at 11 a.m. EST (1400 GMT).

"MAVEN will begin to look at those processes that tell us what happened to Mars' atmosphere, and why Mars perhaps underwent a major climate change in its past," Jim Green, head of NASA's planetary science division, told reporters in a prelaunch briefing late last month. [NASA's MAVEN Mission to Mars (Photos)]

Billions of years ago, Mars was a relatively warm planet with a thick atmosphere and large amounts of surface water. Indeed, NASA's 1-ton Curiosity rover found evidence earlier this year that a spot near its landing site could have supported microbial life in the ancient past.

But then things changed. Mars lost the vast majority of its atmosphere to space, leaving the planet with a shell of air just 1 percent as thick as Earth's atmosphere. Mars cooled down and the surface water vanished, making the Red Planet much less hospitable for life as we know it.

Exactly how this happened remains a mystery, and scientists hope the $671 million MAVEN mission can help solve it.

In September 2014, MAVEN will insert into a highly elliptical orbit that brings it as close as 93 miles (150 kilometers) to the Martian surface and takes it as far away as 3,728 miles (6,000 km). The solar-powered probe will thus be able to sample the Red Planet's upper atmosphere directly and also get a global view of Mars' air on each 4.5-hour pass.

Over the course of one Earth year, MAVEN will use its eight science instruments to study the Red Planet's upper atmosphere and the solar wind, the stream of charged particles from the sun that may have stripped Mars of most of its air.

"The MAVEN spacecraft will make measurements in all regions of 'near-Mars' space," NASA officials wrote in a fact sheet about the mission. "These measurements will allow scientists to characterize the current state of the upper atmosphere and ionosphere, determine the rates of loss of gas to space today and extrapolate backward in time in order to determine the total loss to space through time."

Not hunting for life

While MAVEN's observations should improve scientists' understanding of Mars' past and present potential to host life, the probe won't actively seek signs of Red Planet organisms.

For example, MAVEN cannot sniff the air for methane, a gas that could be evidence of possible Martian lifeforms. (About 90 percent of the methane in Earth's atmosphere is biologically derived.)

"We just had to leave that one off to stay focused and to stay within the available resources," MAVEN principal investigator Bruce Jakosky, of the University of Colorado, Boulder's Laboratory for Atmospheric and Space Physics, said during last month's press conference.

MAVEN may also help serve as a communications relay between NASA's two operational Mars rovers, Opportunity and Curiosity. This job is currently handled by two venerable space agency orbiters, Mars Odyssey (which launched in 2001) and the Mars Reconnaissance Orbiter (which blasted off in 2005).

Unless something goes wrong with Odyssey or MRO — which are both in good health at the moment — MAVEN will be viewed primarily as a communications backup, at least during its one-year prime science mission, NASA officials have said.

MAVEN's launch window officially extends from Monday through Dec. 7. However, Jakosky has said that the spacecraft could actually blast off as late as Dec. 15 without any serious effects on the mission. After that date, MAVEN would have to wait 26 months for the next favorable alignment of Earth and Mars.

Find the latest MAVEN news, photos and videos on SPACE.com. You can also follow MAVEN coverage through the Mission Status Center at SPACE.com's partner, Spaceflight Now.